In an effort to better tie in the New York Giants’ side of their history, the Mets will be wearing green home jerseys as “alternates” in lieu of the traditional blacks.

From what I gather, the green matches the color of the Citi Field seats, which as you may know are a tribute to the green seating in the old Polo Grounds.

The green dye used to produce this particular hue is 100% organic, made from a mixture of soy and lentils. According to a person familiar with the team’s thinking, the use of this dye is part of a new “green” initiative by the Mets to be more earth friendly. In fact the jerseys are consumable, and, strangely enough, those sold at retail will have detachable green wafers made from the same material so you can “sample” the flavor — though I’d suggest you smear a little mustard on them before taking a bite.

These photos were sent to me by a MetsToday reader: 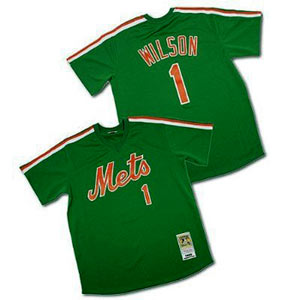 I checked with two different Modells stores in the Hudson County area, and both said that these jerseys would be in stock shortly after the new year. One sales rep confirmed the report:

Naturally, I’ll be adding these jerseys to the MetsToday store as soon as they become available.

In the meantime, have a safe and happy New Year!

Turns out this green dye — the one supposedly produced from a mixture of soy and lentils — is in fact made from people! That’s right … soy-lent green is people! As such the Wilpons have decided to go back to the old black jerseys as an alternate.