Reportedly, MLB offered to cut the suspension in half — to 25 games — if Romero agreed to sit out the postseason. Romero declined the offer and filed an appeal instead. 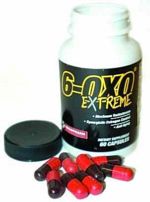 Interestingly, the substance that Romero claims he took — something called “6-OXO Extreme” — is a legal supplement that can be readily found in nutritional chain stores such as GNC.

There is a long sob story about how Romero didn’t know that the product he was supposedly taking would produce androstenedione.

“Basically, I am being punished for not having a chemistry lab in my house to test everything I put in my body, because reading the ingredients on a label is no longer good enough,” Romero said in a statement. “I am all for catching the guys that cheat and punishing them. But I feel like I’m the victim of a system where a player like me is punished because other players before me have blatantly broken the rules.”

Wah wah. Excuse me if I don’t empathize. Perhaps it’s because if someone handed me $4M per year to appear for 5 minutes in 75-80 baseball games, with the caveat that I cannot have a specified list of chemicals in my body while doing so, guess what? I’m going to make damn sure that those chemicals are not in my body.

And how can we be certain that Romero wasn’t knowingly taking andro, and blaming the positive test on 6-OXO Extreme? According to reports, the supplement has been known to possibly contain traces of andro, despite not listing it on the label. Players know this, and several had called the MLB hotline to find out its status (apparently, Romero was not one of those players). Sounds to me like the supplement was a nice scapegoat.

Which leads me to another point. It’s not as though players are clueless and have no recourse when it comes to questionable supplements. In addition to being given an exact list of substances one cannot have in their urine test, players are also educated on the dangers of OTC supplements every spring, are provided the hotline and a website, and are given a list of 12 manufacturers that produce supplements that are safe. You want to go outside that safe dozen? Make a phone call. Check the website. Make certain what you’re taking is in compliance.

Regardless of whether Romero is guilty of taking a banned substance or of sheer stupidity, he’ll be out of action for the first 50 games of 2009 — until about June. In case you’re wondering, the Mets play the Phillies five times before June, then have a three-game series with them beginning June 9.

In addition to the suspension of Romero, MLB also suspended former Marlins pitcher Sergio Mitre for 50 games — also for taking a banned substance that supposedly was in an OTC supplement. Mitre recently signed with the New York Yankees after an injury-riddled career in Florida.

The substance Halodrol was found in Mitre’s system. Unlike Romero, Mitre owned up to his mistake — only the second player in MLB history to take responsibility (Guillermo Mota was the first):

“I did take the supplement in question, and accept full responsibility for taking it,” Mitre said. “It contained a `contaminant’ amount of an illegal, performance-enhancing drug. This was not listed as an ingredient on the packaging, should not have been in the supplement and certainly should not have been available for legal purchase at a store. Despite this, I do accept my punishment because, as a professional, I have a responsibility for what I put into my body.”

Back New Green Home Jerseys for Mets
Next Bosox to Sign Baldelli – Smoltz Next?