Citi Field was recently inspected by a four-legged friend, according to a UPI report and The Daily News.

It is believed that the stray dog was the first member of the general public to run the bases of the Mets’ new infield.

The nimble pooch was finally snagged near the Jackie Robinson Rotunda after running the bases and racing up and down the aisles. Her rescuers have dubbed her Jackie.

“She was around home plate, ran up the first base line and ducked into the stands,” said Mike Pastore, head of field operations for New York City Animal Care & Control. “We were going to set up a trap behind home plate.”

Instead, Jackie ran into an enclosed area, and workers closed a gate behind her.

Pastore, Jackie and Animal Control Officer Eli Velazquez – all rain-soaked and exhausted – emerged from the stadium about 11 a.m.

“She was shaking and jumping around. This was probably her first time on a leash,” Pastore said. “But once she calmed down, I was able to pet her.”

The pooch, a brown-and-cream shepherd mix weighing about 40 pounds, seemed scared and hungry. She was brought to Animal Care & Control’s Manhattan shelter for evaluation.

The pup – estimated to be about a year old – could be up for adoption as early as Saturday if she’s healthy and doesn’t have an owner.

One must assume that Jackie’s romp around the stadium is a prelude to the continuance of “Dog Day at Shea” … I for one sure hope so.

Interestingly, Shea Stadium was long known for stray cats — particularly a black feline that ran in front of the visiting dugout during a crucial game against the Cubs in 1969. 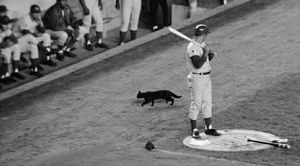