Whew! That was a close one! Here it is mid-January, about a month before pitchers and catchers report, and the Mets were STILL without a fifth starter. That is, until a few hours ago, as the Mets came to terms with righthander Tim Redding.

The Rochester native — who will turn 31 about a month from now — enjoyed his best season in the big leagues since 2003, before the Washington Nationals non-tendered him a few weeks ago. Redding won ten games for the second time in his career and compiled a 4.95 ERA with a 1.49 WHIP for the Nats. He made 33 starts and hurled a career-high 182 innings. 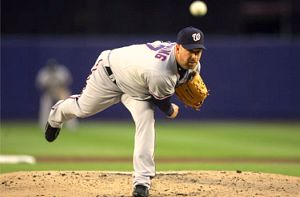 Although the Mets are more desperate to find a solid #3 to follow Johan Santana and Mike Pelfrey, I still like this deal — as long as it’s the first of a series of signings. Redding is what we might call a “backup plan” or insurance — similar to when the Mets signed Jose Lima, Chan Ho Park, Brian Lawrence, and Claudio Vargas in recent years. Yes, he ate innings and might have been considered the Nats’ “ace” last year, but I’m not putting much stock into his surprising season — mainly because he’s fooled us before. After winning ten games and posting a sparkling 3.46 ERA as a 25-year-old for Houston in 2003, Redding battled nagging shoulder injuries and never came close to that kind of performance again. He’s a five-inning starter with a decent fastball but questionable secondary stuff. That said, he’s nice to have around as insurance at the back end, and could fit right as a long reliever. In other words, he’s another Claudio Vargas.

With Redding under wraps, does this mean the Mets move away from Pedro Martinez? I hope not. I can see a scenario where Pedro wins the #5 spot and pushes Redding into the aforementioned long relief role — a role that was not properly managed in 2007 nor 2008 yet would have significantly eased the burden on the rest of the bullpen in both years.

Back Lucky Dog at Citi Field
Next Pedro Listening to Marlins