Who who, who is Carvajal? 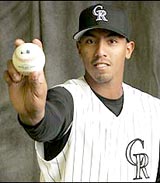 I’m dating myself here, but anyone remember Donovan? The song (not the soda) Mellow Yellow? He also sang a song that went, “goo goo, goo goo Barabajagal, was his name now …”

It may be a stretch, but one day at Shea you may hear that song being played when a pitcher emerges from the bullpen — Marcos Carvajal.

It’s a stretch for two reasons: first, “Barabajagal” doesn’t rhyme well enough with Carvajal, and second, this young righthander is an enigma.

Marcos Carvajal was recently placed on waivers by the Tampa Bay Devil Rays, a team that is starving for quality young pitching. When you’re starving, you don’t throw a steak off the table. But you do throw out a rotten apple.

That’s not to say that Carvajal is a rotten apple. In fact we know very little about him, other than a scant scouting report that’s been circulating that goes something like this: “live arm, a mid-to-high 90s fastball, a decent slider and nasty change-up.” Hmmm … if he’s that skilled, why he is getting dropped from the Rays and passed over by nearly every other MLB team?

It’s simple: spring training has just begun, and 40-man rosters are more or less set at the moment. Most teams aren’t looking to make any changes to the 40-man until their players report and they get a good look at what they have. Because of the Rule 5 draft, many players with no chance of making their big league club were added to that 40-man, for no reason other than to keep them from being drafted by someone like Kansas City or Tampa Bay. The Rays added Carvajal to the roster for exactly that reason; he had some MLB experience, can throw 95+, and therefore there was an outside possibility someone would be willing to put him on their 25-man roster for the season — someone like the Royals, who by trading Ambiorix Burgos to the Mets and Andrew Sisco to the White Sox had an opening in their organization for a young flamethrower. So the Rays protect Carvajal during the winter. But then a few days ago they make a trade for a player that must go on their 40-man, Jae Kyuk Ryu. Ryu is more or less penciled into the Rays’ bullpen, whereas Carvajal was projected to start the season in the minors. To make room for Ryu, they drop Carvajal, figuring that no one will notice, and if they do, they won’t drop a valuable player from their 40-man to clear a spot. GMs really think this way, because it’s very common to get away with such a move. The Mets, however, happened to have Steve Schmoll wasting a space on the 40-man.

If the Mets are lucky, this will turn into something similar to the stories of Bobby Jenks and Derrick Turnbow — two young, enigmatic flamethrowers cut loose (ironically, both by the Angels) and available to all of MLB. Both not only made their new teams but established themselves as the closer. While it’s doubtful that Carvajal will unseat Billy Wagner anytime soon, it is not completely outside the realm of possibility that he becomes a factor somewhere in the Mets’ bullpen within the next year or so.

Only 22 years old, he still has plenty of time to refine his trade. Strangely, though he’s only been a professonial for four years, he’s already been traded four times and selected as a Rule 5 pick once. Some people might look at his annual change of scenery as a negative, but in fact it is a positive. When you are a young player in the minors, and teams are trading for you, that means you have value. It’s when no one wants to trade for you, that it’s time to reconsider your career. In other words, Carvajal has been passed around as a valuable commodity — the baseball player version of cash.

In the middle of all this passing around, Carvajal did manage to get into 39 games for the Colorado Rockies in 2005. He was in way over his head, but managed 47 strikeouts and 21 walks in 53 innings, posting a decent 1.38 WHIP. Not bad for a guy who probably should have been in high class A ball. In fact, his situation is similar to Ambiorix Burgos, another tremendously talented arm who had no business closing games for Kansas City the last two years, but nonetheless did an acceptable job.

So where does Carvajal fit into the 2007 opening-day bullpen? He doesn’t. And for that matter, Burgos might not, either. However, both could easily fit into the plans late in the season, and definitely will get an opportunity in 2008 — assuming their development continues to advance. The Mets traded away two triple-digit relievers — Matt Lindstrom and Henry Owens — to pry Jason Vargas from the Florida Marlins. However, both of those men were approaching their late 20s, thereby getting very close to non-prospect status. There is little room in the Mets’ bullpen for inexperienced arms, so it made sense to trade them while they still had value. Conversely, by acquiring both Burgos and Carvajal, the Mets not only have potential additions to their bullpen — with big-league experience — but they also have valuable trade chips for the next 3-4 years. As long as Carvajal stays healthy, he’ll keep his status as a commodity, and possibly help the Mets land a big-name pitcher at the trading deadline this June.

Or, he could become the next Bobby Jenks. Perhaps all it takes is a different set of eyes (Rick Peterson’s ?) to spot something that unleashes his true potential. At best, he’s another Jenks. At worst, Carvajal is a trading chip.

The best part of this pickup is the cost: Steve Schmoll. Schmoll has some MLB experience as a sidewinding funk thrower, the kind that Willie Randolph loves to have as an option in his bullpen. However, Schmoll hasn’t shown enough to warrant confidence from the Mets’ brass; they see him as a situational ROOGY at best. To make room on the 40-man for Carvajal, the Mets had to DFA Schmoll. If they lose him, big deal — he had almost no chance of cracking the Mets’ crowded bullpen this year. Further, Steve Schmoll is what he is — a 27-year-old tweener or “AAAA” pitcher. No amount of tweaking or experience is going to make him remarkably better than he is right now. Put simply, Schmoll is not turning into the next Dan Quisenberry. Carvajal, on the other hand, could be another Jenks. Further, there is a very real possibility of Schmoll going through the ten days of assignment, becoming a free agent, and re-signing with the Mets as AAA filler. So in the end, the pickup of Marcos Carvajal is an extremely low risk, high-reward move. Kudos to Omar Minaya and co. for keeping their eyes peeled and an ear to the ground in grabbing another golden arm.

Back Kobe vs. Matsuzaka
Next Lastings Impression