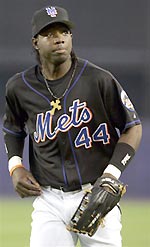 Lastings Milledge has entered the building.

The heralded, cocky, misunderstood, enigmatic, immature, tremendously talented Milledge reported to Mets spring training today, one day before the rest of the position players are expected to show up. Though it’s nice that he showed the initiative to arrive one day early, there are already folks on his back for not getting here perhaps a week sooner.

We don’t know why Lastings arrived a day early, as opposed to a week early or right on time. This is what we do know:

1. He is enormously talented, particularly with the bat. His bat speed has been compared to Gary Sheffield’s.

2. Milledge did not exactly have an auspicious debut in 2006. Though he showed flashes of brilliance, overall he looked raw, unpolished, and often overmatched — not just at the plate but in all areas of his game. He made baserunning blunders and costly defensive mistakes, the most glaring ones in Fenway Park. Granted, the Green Monster is difficult for anyone, but his misadventures there were the tip of the iceberg, and magnified his issues in the field.

3. The Mets’ brass requested that he play winter ball to help accelerate his development. He denied the request.

4. The Mets signed Moises Alou early in the offseason to be their starting left fielder.

5. The Mets traded for 25-year-old Ben Johnson, a former slugging prospect of the Padres who plays all three outfield positions and has two years in the big leagues. He is expected to make the team as a backup outfielder and occasional starter.

6. The Mets also signed David Newhan, a speedy utilityman. Though he also can play all four infield positions, he is officially listed on the roster as an outfielder.

Again, we don’t know Milledge’s reason for arriving one day early, and we have no idea why he refused to play winter ball. There could have been family issues or some other legitimate personal reason.

However, the Mets have made it very clear that they believe he needs to get more at-bats, and play in more games. They feel that although he is skilled, he needs to further develop and polish those skills before he is ready to contribute to the Major League team.

Further, the Mets have acquired several more experienced players to compete for roster spots and add outfield depth. It’s already a given that, barring injury, Carlos Beltran will start in centerfield, and Moises Alou in left. Though there are some who think Shawn Green’s RF job is up for grabs, the reality is that Green is currently penciled in as the starter, and it is his job to lose. Additionally, Endy Chavez is more or less guaranteed to be the fourth outfielder. Whether or not the Mets carry a fifth outfielder may have something to do with David Newhan and fellow utilityman Damion Easley. Easley signed a Major League contract early in the offseason, so there’s speculation that he will be given every opportunity to win a roster spot. At the same time, the Mets are intrigued by Newhan’s versatility and speed. If the Mets carry both Easley and Newhan, there might not be room on the roster to also carry a fifth outfielder.

Now, again, we don’t know about Lasting Milledge’s personal issues. But, if I’m Lastings Milledge, and I want to make the big-league team in 2007, I’m paying attention to these roster moves. It looks like I’m getting squeezed out. At best, it looks like the only chance I have of making the team is to not just impress Willie Randolph in the spring but to flat out blow him away.

To do so, Milledge will have to, of course, hit well. But more importantly, he’d have to prove beyond doubt that his skills, on April 1st, will be more valuable to the team than those of Ben Johnson, David Newhan, Damion Easley, Chip Ambres, and Ruben Sierra. In fact, he might have to prove he’s also better, right now, than Shawn Green — because it’s doubtful the Mets will carry him on the roster to sit the bench. That’s a tall order, one that will require him to show vast improvement in his running game and his fielding prowerss, in addition to consistency with the bat.

The point is, the competition is stiff, and highly motivated. Chip Ambres, for example, was once a can’t-miss prospect that has become a non-prospect and is not far from being out of baseball altogether. He probably has no chance to make this team, but you can bet he’s going to be hustling his butt off and doing everything he can to impress someone. Ben Johnson was given a taste of bigs the last two years, used as a reserve guy by the Padres. He’s at a point in his career where Xavier Nady was last year: either win a big league job now or be forever tagged as a backup or a “AAAA” player. Ruben Sierra’s situation is mysterious. If he’s really being given a chance to make this team, it is probably the last one he’ll get in his life.

How often does a player improve his skills on a baseball field by doing nothing? Rarely, if ever. Maybe if we knew he spent all winter in his own hitting tunnel, or with a personal baseball trainer, or up on a mountaintop with a yoga guru to clear his head, we as fans might feel better about Milledge’s chances to make the team. We’d certainly feel better about his attitude and his motivation to make the team.

It certainly doesn’t help his case that he’s often mentioned in the same breath as David Wright and Jose Reyes, when people talk about the youthful core of the team. Unlike Milledge, Wright and Reyes were successful almost immediately upon entering MLB — though Reyes did have a few hiccups. In addition to their early success, Reyes and Wright are seen as players who made it to the bigs as a tribute to both their talent and work ethic. Fittingly, Reyes and Wright reported to Mets’ camp a week early, with the pitchers and catchers. Both players had outstanding seasons in 2006, are guaranteed to be in the starting lineup, and signed long-term contracts. However, they still felt it important to get a head start on the spring and get extra work on their skills. With Wright and Reyes setting the bar that high in terms of effort, Milledge in comparison looks like an unmotivated, lazy bum.

Of course that’s not true. If Milledge were a lazy bum, he would not have made it this far. But to succeed in the eyes of Mets fans, he has to measure up to Reyes and Wright. (Interestingly, if Reyes and Wright decided to show up today instead of a week ago, Milledge might be seen in a more favorable light.) If Milledge had played winter ball as asked, showed up a week early, and then struggled this spring, that’s OK, because at least we can see him trying, and putting forth a good effort. In contrast, if Milledge does not impress this spring, people will immediately point to his work ethic as the reason he doesn’t match expectations.

Personally, I don’t know which way Lastings will go, but he’s already off on the wrong foot in the view of many fans. It will help his case if the media starts writing about him taking extra swings in the batting cage, or staying after hours to shag more fly balls, or spending time with Rickey Henderson to work on his approach at the plate. If we don’t read those kinds of things, then it looks like Lastings will need to have that .400 spring — or something close to it — to remove the “bad attitude” label. It’s funny how a batting average measures not only your skill at the plate but also the public’s perception of you as a person.

Back Who who, who is Carvajal?
Next Continuity is Key