Why Steve Phillips is Right About Beltran 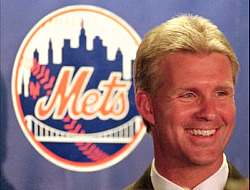 Yes, I also watched the game last night on ESPN, and for part of the time did not use the mute button. Yes, I agree that Joe Morgan, Steve Phillips, and Jon Miller are not the best broadcast team. No, I don’t understand anything Morgan says. Yes, I disagree with 99% of what Phillips says.

But one thing I do agree with Phillips on, sort of, is the Carlos Beltran issue. If I were the Mets GM, I would absolutely consider trading Carlos Beltran at the end of this season. Not because he’s lacking edge (even if he is) or clutchness (ditto), not because he’s imperfect (aren’t we all?), not because he lacks leadership skills (there are at least 20 other Mets guilty of the same), and not because he’s an airhead (he is, you just don’t notice it when he’s hitting .400). Rather, following are my reasons why it would make sense to explore the possibility of dealing Beltran next winter.

If Beltran continues hitting the way he’s hitting now through September, or at least finishes the year with “MVP-like” numbers, then his value will be at a level that most likely will never again be higher. Is it possible that he’ll have at least one more “MVP” year after 2009? Sure. It there a good chance he’ll have more than one such year? No. He’s 32 this year, will be 33 shortly after Opening Day 2010. Without PEDs, ballplayers simply do not have career years in their mid-30s. I’m willing to bet that Beltran will not be worth the $18.5M he’ll receive in 2010 and 2011. More importantly, after an MVP-type season, being a switch-hitting, Gold Glove-caliber centerfielder, and having two (rather than one) years left on his contract, Beltran should be able to fetch a significant package of good young prospects that are close to MLB ready or already in MLB.

As already mentioned, Beltran is 32 years old now. Ages 33 and 34 may not necessarily be down years, but he has been through a number of leg injuries and surgeries. We need only look back to former Mets such as Robin Ventura and Edgardo Alfonzo to see how quickly great players can break down once they get into their early 30s. Beltran plays a position that takes a lot of wear and tear as it is — a young man’s position. Before he turned 30, he was having problems with his knees and his quads, so why would we expect those issues to disappear as he ages? For years, the Mets have been criticized for fielding an “old” team, and the “other” New York team is an excellent example of what can happen if you retain aging ballplayers at skill positions (i.e., C, SS, CF).

If the Mets fail to make the postseason yet again, and Beltran has a phenomenal year, then what’s the point of keeping him? To miss the playoffs three straight years, with all the money spent on supposedly top-notch talent, would indicate that it’s time for the team to change direction. Carlos Delgado’s contract is up at the end of this year, and it’s hard to imagine the Mets re-signing him. Both Brian Schneider and Ramon Castro will be gone, so the catching position will be wide open. Gary Sheffield will be gone. Meantime, the minor league system offers next to nothing in the way of Major League talent — outside of possibly Fernando Martinez. The Mets will need at minimum a catcher and a first baseman, and the free agents available will be Bengie Molina and Adam LaRoche. They can go one of two ways: a.) continue with the plan of “patch up with aging veterans and hope it’ll be enough to get us to the postseason”; or b.) trade away one or more of the more valuable, but not so youthful, commodities, to bring back young talent. You have to give up something to get something, and Beltran might be the key to getting a lot of good somethings.

This Doesn’t Mean I WANT TO Trade Beltran

Don’t misconstrue — I’m not looking for ways to jettison arguably the best centerfielder in the game today. However, from a GM’s perspective, I can definitely see why it would make sense for the Mets to explore the possibilities. Certainly, I would not give away Beltran for less than the type of package that was dealt to Minnesota for Johan Santana. Absolutely, I’d want to get at least one good to excellent young catcher or centerfielder back — someone like a Russell Martin, a Dioner Navarro, a Nate McLouth, a Nick Markakis, a Jacoby Ellsbury — or an ace-like, established arm (i.e., Jake Peavy, Roy Halladay, Brandon Webb). It might also be worth considering a package of a few young MLB fill-ins and sure-fire prospects — for example, a deal with Baltimore that would bring back Felix Pie (or Adam Jones), Matt Wieters, and one of their highly touted young pitchers. Mind you, none of these mentioned players are likely available in ANY deal, but I throw them out there as examples of the type of talent I’d expect to receive if Beltran were traded. And, it’s quite possible that type of talent wouldn’t be available for Beltran — in which case, you keep him.

The Beltran situation is a lot like that memorable Steve Phillips trade of 2001 — the one that brought Roberto Alomar to New York. Looking back on it now, Alomar was a bust, and none of the prospects sent to Cleveland panned out. But, at the time, it made a lot of sense for Cleveland, and is similar to what we’re discussing. Alomar was coming off a career year — an MVP-type year, in fact — but he was 33 years old and had a history of nagging, but non-debilitating, injuries. There was no reason to believe he’d drop off as much as he did, and so quickly, so from the Mets’ perspective, it was a good deal (at the time). Further, though the Indians finished in first place in 2001, they were an aging ballclub that realized it was time to make a transition. In addition to Alomar, Juan Gonzalez and Kenny Lofton exited that winter, and a year later, Bartolo Colon and Jim Thome were gone as well. (Colon, by the way, was swapped for Grady Sizemore, Brandon Phillips, and Cliff Lee — one example of how selling high can benefit a team in the long run.)

I can’t say Carlos Beltran is what’s keeping the Mets from winning a World Championship. I won’t say the Mets are a better team without him. And I don’t necessarily buy into the “blow up the core” theory. But I will say that, if there’s a deal that can improve the Mets organization for the present and the future, and it would have to include saying goodbye to Carlos Beltran, then it would be silly not to consider it.

Back Quick Preview: Mets vs. Dodgers
Next Mets Game 38: Loss to Dodgers