Jerry Manuel Is a Dinosaur 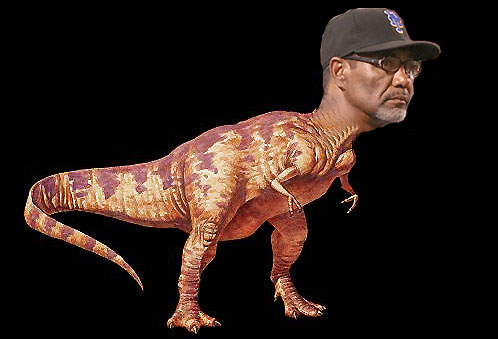 David Lennon confirmed what we all suspected: Jerry Manuel is a dinosaur.

In today’s Newsday, Lennon details the Mets manager’s reliance on “instinct” and ability to “read” players on a particular day, as opposed to relying on stats.

“A lot of it is based on an ability to read individuals,” Manuel said on Wednesday. “To try to put them in situations that are best for them and then how does that fit in the context of winning.

“That’s why I like early hitting. I watch that very carefully because I think that can be critical in making the right decision on what you think is best. Not just study a number and say, ‘OK, he’s nine out of 10 against this guy.’ Am I going to get that one out of 10 or that nine out of 10? I don’t like to rely on stats.“

For example, he must have thrown way that “stat” that said Ramon Castro collected two hits against 98-MPH heaters from the hand of Josh Johnson on one particular May afternoon. “Hits” of course, are overrated. Manuel could “read” that Castro’s long, slow swing would never catch up to Matt Lindstrom’s fastball, which was as at least .03 MPH quicker than Johnson’s. And Manuel could see from the way Omir Santos was warming up pitchers in the bullpen that day, that Santos would have a better shot to get a hit in that particular situation.

Lennon also quotes Manuel in regard to learning his players as the season wears on, and supports Manuel’s declaration that his teams are stronger in the second half.

“Historically for me, my teams play better late than early, because I kind of know how they fit,” Manuel said. “Unless there’s been a rash of things thrown into the mix, and it takes me a little longer to figure out who fits where.

“But once I find out where everybody fits, what I can do with everybody, then we start to understand each other, then everything kind of clicks. It’s really our job to know our players better than anybody. If we don’t, we’re not doing our job.”

Since Lennon didn’t have space to provide that supporting information, I have it for you here:

Obviously, 1999 and 2000 were anomalies (and the Mets’ second half had NOTHING to do with Carlos Delgado). You can see the extraordinary difference between first and second half records from all the other years and understand Manuel’s process.

Something bugs me though, about this year’s Mets and Manuel’s figuring out “where everybody fits”. This 2009 team isn’t remarkably different from the 2008 version — at least not in regard to the position players and the starting rotation. Yes, the bullpen is completely revamped, but Manuel wasn’t able to understand “who goes where” after “managing” last year’s pen for four months. And it’s not like Manuel wasn’t around prior to last June — he was sitting next to Willie Randolph in the dugout as bench coach.

If you have read MetsToday for any length of time, you know that I’m an “old school” guy who tends to eschew many of the modern stats and sabermetrics. But at the same time, you have to recognize some stats, and consider them in your decision making.

But at least we now know why Manuel would send up Angel Pagan to hit for Danny Murphy against a lefthander, despite the fact that Pagan hadn’t yet faced an MLB pitcher in over a year, and Murphy is supposedly such a great hitter against all pitchers that the team needs to find a position for him. Clearly, these decisions are based on information that is inaccessible to the average fan. So sit back, shut up, and let the master perform his wizardry. Have faith — there are 120 games left for Jerry to figure out how to manage this team.

Back Could Jose Reyes Be Out for the Season?
Next Filling the Holes