Why the Pirates are Better than the Mets 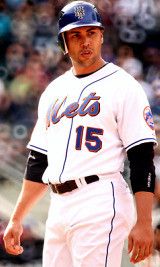 Carlos Beltran, after missing the first two games of the series against the Pirates, hit a double and a homerun in third contest, and afterward had these inspiring words:

Hmm … is Beltran throwing the team under the bus for the first two games? Not exactly inspiring words. Reminds me of Kelly Leak, and I’m not sure why. Anyway, I digress. We move on to the crux of the matter.

The truth is, the depleted Mets squad that took the field in the first two games of this series most certainly is NOT better than the Pirates. Without Carlos Delgado, this team cannot be considered a postseason club. Take away Jose Reyes — and replace him with a AAA shortstop with zero offense — and suddenly the Mets are probably a .500 club. Remove Beltran from the equation, as well as Ryan Church, and the Mets become a sub-.500 team that struggles because it’s either overmatched offensively or beating itself via poor fundamentals.

In other words, a team that will have a tough time beating the Pittsburgh Pirates.

The Pirates are short on All-Stars, and their offense doesn’t remind anyone of the old “Pittsburgh Lumber Co.”. But, most of their pitchers do a decent job of putting the ball over the plate, their fielding is above average, they hustle, they put the ball in play, and they have a few athletes who can change a ballgame with their speed. All that adds up to a team that shouldn’t embarrass itself, and should win close to 50% of their games.

Of course, that doesn’t mean the Mets should expect to lose, or to lay down for cellar-dwellers such as the Nationals. But one needs to look around and see reality, rather than admonishing the lucky few who have been able to stay on the field. Right now, it’s a Mets team in shambles, but one that should be able to see a light at the end of the tunnel.

Back Mets Game 52: Loss to Pirates
Next Elbows and Hamstrings