Your Leader Drives a Bus 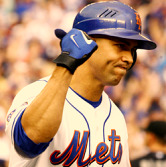 I’m not getting all the media hype about Carlos Beltran’s comments yesterday, and how it is Beltran becoming a “leader”.

Anyone who has played a team sport would not be inspired by anything Beltran has ever said publicly. Nearly every time the reclusive Beltran says something, he’s either directly or indirectly throwing his teammates under the bus.

Interestingly, the other perceived “leader” on the Mets — Johan Santana — has a similar method of public flogging. Just ask Danny Murphy, or anyone else who ever made an error behind him.

Sorry, I don’t find it “refreshing” or “motivating” when a player says he’s embarrassed about how the rest of his teammates played in two games while he sat home with a tummy ache. The media’s grasping at straws in an effort to find a story and identify the “leader” that doesn’t exist, and the fans are buying into it because they’re so desperate to find something or someone that suggests this club can get through the current storm.

Keep searching, fellas, and bring an umbrella. More rain is about to fall, to be followed by increasing wind.

Back New Trainer on Staff, and Other Links
Next Mets Game 53: Win Over Nationals