If you remember, Switzer was the guy that AA hitters beat up on all spring while the rest of the Mets were playing in the WBC. But, he IS lefthanded, and he does have a 2.13 ERA with 29 strikeouts through 25 innings in Buffalo. So perhaps he simply wasn’t 100% ready during spring training. Switzer is holding lefthanded hitters to a Mendoza-like .182 batting average, and account for 19 of his strikeouts. 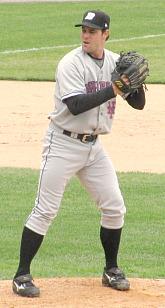 In addition, it was announced that Fernando Nieve would get the start against the Yankees on Sunday.

This set of moves and non-moves comes to me as a bit of a head-scratcher. I understand the idea of another can of paint to throw on the wall promoting a LOOGY with the hopes he can retire big-league LH hitters. Toward that same end, I don’t understand why Ken Takahashi is still in the big leagues — will the Japanese lefty now be used to face righthanded hitters?

Further, why Fernando Nieve on Sunday, rather than Nelson Figueroa — who could’ve been promoted with a demotion of Takahashi? Nieve was doing fairly well in AAA (3.70 ERA, 1.15 WHIP, 23 Ks, 10 BB in 24 IP), but not nearly as well as Figgy (2.93 ERA, 1.03 WHIP, 38 Ks, only 14 BB in 55 IP). Yes, I realize that stats — particularly at the minor league level — are not always the best indicators of future performance, but you have to wonder what more Figueroa has to do to get another start in MLB. You also have to wonder if the Mets are sticking it to him for his original refusal to go back to Buffalo.

That’s just my conspiracy, though. The baseball minds in the Mets’ front office likely prefer Nieve’s chances against the Yankees because of his velocity, which reportedly touches the upper 90s. Though, in Coors Field East, I would think that the faster it goes in, the faster it will get hit out. There’s also the matter of the 40-man roster, which Figgy is not on (though, neither is Switzer, and I doubt anyone would be chasing after Takahashi).

Finally, what was the original point of promoting Nieve a week ago? The Mets purchased his contract on June 5th, and he pitched in one game, the very next day, hurling two scoreless innings of mopup duty against the woeful Nationals in a 7-1 blowout — and we haven’t seen him since. At the time, we thought he was going to help out in the bullpen with J.J. Putz going on the DL. But now I wonder if the Mets really brought him up in case John Maine couldn’t go on that same Saturday night?

In any case, Nieve will be plenty fresh for his game against the Bombers — he’ll have six days’ rest. Who knows, he may surprise us.

Back A Source of Power
Next Mets Game 59: Loss to Yankees