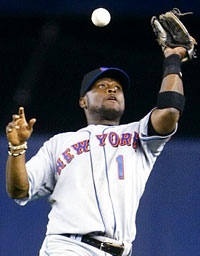 Just pack it in, Mets fans.

The score went back and forth all night, and in the end it was a combination of poor fundamentals / bad baseball vs. all-out hustle that was the difference.

After going ahead 8-7 in the top of the eighth — against the immortal Mariano Rivera no less — the Mets appeared poised to take the game, with their perfect closer Francisco Rodriguez heading to the mound.

Indeed, K-Rod dispatched of Brett Gardner to get the initial out of the ninth, gave up a single to Derek Jeter, then struck out Johnny Damon for the second out of the inning. However, Jeter stole second on the strikeout, putting himself in scoring position and leaving first base open — giving Rodriguez the luxury of pitching around Mark Teixeira, which he did. That brought up Alex Rodriguez, who was ahead of the count 3-1 when he popped a routine fly ball to short right field. It appeared to be an easy out, but Luis Castillo stumbled a bit, lost sight of the ball, and the horsehide bounced off the side of his glove, falling safely on the outfield grass. Meantime, Mark Teixeira took nothing for granted, and was busting it full tilt on contact, and scored easily from first base on the dropped ball. Just like that, game over, Yanks win. Ouch.

What a shame … Luis Castillo seemed to have finally found his way back into the hearts of Mets fans with his slick glove work and much-improved offense. But all that has been erased thanks to one little popup. Honestly, he should be traded as soon as possible — not because he’s a bad ballplayer, but because the fans will never, ever forgive him for this one.

BTW, where was Ryan Church on that popup? He should have been nearby, maybe close enough to back up the play. Instead, he assumed — like the rest of us — that the game was over and thus he was jogging toward the dugout. Maybe, just maybe, had he continued charging in and been nearby when Castillo dropped the ball, he would’ve been in position to pick it up and keep Teixeira at third base. Then, who knows?

Yes, Castillo is clearly and obviously the most visible goat of this game. However, I had a major problem with intentionally walking Teixeira, who represented the winning run, particularly with Alex Rodriguez coming to bat. It’s just bad baseball to put the winning run on base. Let the guy beat you with a two-run homer — the odds are in your favor if you make him swing.

Speaking of other goats grazing in the pasture, new LOOGY Jon Switzer allowed a three-run homer to Hideki Matsui on the third pitch he threw as a Met to give up a two-run lead. Switzer threw six balls total — three were balls, three were hit into play. Next!

Home plate umpire Fieldin Culbreth made it tough on all hitters and all pitchers, for both sides, with his remarkably inconsistent strike zone. Pitches in particular spots that were called strikes one minute were called balls the next, and vice-versa.

Strange move by Joe Girardi to bring in Mo Rivera with two outs in the eighth inning of a tie game. Obviously he wanted the matchup of Rivera’s cutter against Beltran from the left side, but it backfired when Beltran walked, setting up David Wright to drive a double to put the Mets ahead. Talk about managing for your job.

Another strange move by Girardi was allowing Brett Gardner to lead off the bottom of the ninth, rather than replace him with veteran Johnny Damon — who came in two batters later as a pinch-hitter for Nick Swisher. Personally, I’d have preferred to have the two veterans — Swisher AND Damon — face K-Rod in that situation. Further, I’ll take Damon any day of the week, against any pitcher, to lead off an inning in a game where I absolutely need a baserunner. The guy has been and remains an on-base machine.

Early in the game, Joba Chamberlain seemed to be giving away the contest — and boring everyone to sleep — with his inability to throw strikes to the least-dangerous hitters in the Mets lineup. I don’t know what was going through that young man’s head, but he wasn’t focused on making his pitches. How in the world do you walk Alex Cora twice in consecutive innings without coming near the strike zone once — knowing full well that the two best hitters in the NL are looming on double-deck? If I were Jorge Posada, I might have choked Chamberlain.

All told, Yankees pitchers handed nine free passes to the Mets. From that standpoint, the Bronx Bombers had no business winning the game. But they did.

The Mets left nine runners on base, the Yankees left five.

Ryan Church had only one hit but drove in three runs and stole a base. Wright had two more hits and a walk, lifting his average to .364 and his OBP to .461.

You can’t keep saying, “well the Mets would’ve won if only … (fill in the blank: so-and-so didn’t make an error, did make a play, didn’t allow a hit, was called safe / out, etc. etc.)” Because here’s the bottom line: whereas winning teams seem to find ways to win night in and night out, losing teams seem to find ways to lose. Guess which side of the fence the Mets are on this year?

Somehow, some way, the Mets will suit up again on Saturday in the Bronx to face the Yanks. Fernando Nieve makes his first start as a Met against Andy Pettitte. First pitch is at 4:10 PM and will be broadcast on FOX. Could it get any worse?

Back Jon Switzer Promoted
Next Fifty Percent is Unacceptable