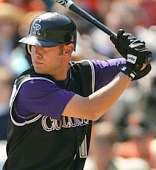 According to several reports, the Mets have placed pitcher Fernando Nieve on the disabled list and promoted Buffalo outfielder Cory Sullivan. Sullivan will wear uniform #19 and should be available at some point during tonight’s contest vs. the Nationals.

Per Jerry Manuel, and posted on Bart Hubbach’s Twitter page, Sullivan was chosen over Nick Evans because Sullivan is “more versatile”.

For those unaware, the lefthanded-hitting Sullivan has played 253 MLB games in centerfield, 27 in left field, and 14 in right field. He is, essentially, redundant to Jeremy Reed. He is batting .290 with 2 HR and 16 doubles in 286 AAA at-bats this year, playing mostly in CF. To my knowledge, he has never played first base nor any other infield position (he is also a lefty thrower). But what does that matter? The Mets have Fernando Tatis, Jeremy Reed, and Livan Hernandez to back up Dan Murphy at 1B.

Back Fitting Time for Figgy
Next Mets Game 92: Win Over Nationals