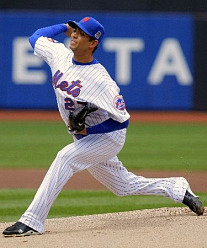 With the recent struggles of Tim Redding (and by recent, we mean since the first pitch he threw as a Met), the media and fan base has begun clamoring for young lefthander Jonathan Niese. After all, Niese has strung together 8 consecutive strong starts, a big turnaround from his rough beginning to the 2009 season. Certainly he’s earned another promotion, hasn’t he?

Well, yes. But there’s someone else who earned that promotion as well, and earned it far long ago. In fact, many are still wondering why he was demoted in the first place.

Of course, I’m speaking of Nelson Figueroa, the international journeyman who might have finally “figured it out”, but we’ll never know until the Mets (or some other MLB team) gives him a legitimate shot. Say what you want about his mediocre career numbers in MLB, but that’s past history. Pitchers don’t generally improve their physical skillset as they get older, but they can get smarter. Ask Jamie Moyer.

Now, don’t get the wrong idea — I’m not advocating the idea that Nelson Figueroa can step in and be a dominant, frontline starter. His ceiling, at this point, is average #5 man. A guy who won’t get blown out within the first three innings of a game, who will eat up some innings, who will keep his cool in the face of adversity, who will play the entire game (i.e., field his position, hold runners, lay down bunts, etc.), who will give you chance to win every five days. It doesn’t sound like much, but the Mets have had a hard time finding someone other than Johan Santana who can deliver on those simple expectations. Figgy has pitched in “big” ballgames and succeeded in every part of the globe, and he continues to build his impressive resume and reputation as a “professional” in Buffalo, NY.

On Saturday night, Nelson Figueroa won his sixth straight winning decision for the last place Buffalo Bisons (the worst team in Triple A), a complete game shutout, 2-0. The righty gave up just seven hits, walked none, struck out five, lowering his team-leading ERA to 2.32, 2nd best ERA in the International League! Figueroa has allowed more than two runs in just two of his 15 starts, and only three runs once. He has averaged an unbelievable 7.1 innings per start! His WHIP is 1.04, also 2nd best in the International League. … Figueroa has averaged 113 pitches per game since June 2nd, the beginning of his 6-0 streak.

How Figeuroa has not earned a promotion yet, while the likes of Patrick Misch, Tim Redding, Elmer Dessens, et al, have been given the ball repeatedly over the past month, is certainly a head-scratcher. Maybe the Mets are still ticked off at Figgy for initially refusing his minor-league assignment back in late May — we know Jeff Wilpon’s right hand man Tony Bernazard has a penchant for holding grudges. But in Figgy’s defense, the demotion made little sense at the time, and makes less sense now. (Though, that was around the same time Darren O’Day was inexplicably let go … perhaps fumes from the new paint in the Citi Field offices were affecting brain function.)

I’m not so sure. Niese right now is in the midst of a strong streak of excellent outings. Is there one person who believes that promoting Niese is going to have an impact on the Mets’ postseason hopes? If not, then why be so quick to bring him up? Wouldn’t it be better for the youngster to continue to hone his craft, and build his confidence, at the AAA level? Have him come up in September to make a few starts, with the hopes of his lining up a rotation spot in 2010. My concern is what a few bad starts in MLB might do to Niese’s confidence right now. If Niese was a miraculous talent and was blowing away people, I might think differently. But his AAA numbers aren’t even as impressive as Figueroa’s, so why should we believe that they’ll translate to something better than Figgy’s projection of back-end starter / long reliever? (That’s not to say Niese will always be at that projection — what I’m saying is that we shouldn’t expect much more than that right now.)

At the same time, there’s no reason you can’t promote BOTH Niese and Figueroa. Fernando Nieve’s spot is already open, and I’d be quick to exchange Redding, Dessens, or Misch for either of Buffalo’s top moundsmen.

Back Mets Game 91: Loss to Braves
Next Mets Promote the Versatile Cory Sullivan