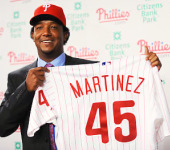 As if things couldn’t get worse for Mets fans, Pedro Martinez made good in his first start in 2009, allowing the Cubs 3 runs on 7 hits in 5 innings en route to his first win as a Philadelphia Phillie.

Yes, Pedro fulfilled the prophecy of being “only” a five-inning pitcher. But, he doesn’t need to be much more at the back-end of the Phillies rotation. And anyway, how many starters on the Mets not named Johan are a lock to pitch five innings these days?

But who cares, right? The Mets aren’t going anywhere this year, anyway. Pedro would have stolen valuable innings from people who could help the team in the future, such as Tim Redding and Elmer Dessens.