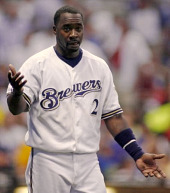 As part of a flurry of moves intended to shake up the ballclub, the Milwaukee Brewers have designated Billy Hall for assignment.

Hall has another year and over $8M left on his contract, a hefty sum unlikely to be picked up by an opposing team.

Why are the Brewers making all these moves? Because GM Doug Melvin is making a last-ditch attempt to salvage the season, and give the team a shot at the postseason.

The 55-58 Brewers are in fourth place, 7.5 games behind the NL Central leading Cardinals, and one slot ahead of the Mets in the Wild Card standings. Things don’t look great, but Melvin is not about to give up on his team. The moves may not make a difference, but his feeling is that the way they were going wasn’t working, so a change was in order.

This is the same GM who last year fired his manager with 12 games left to play, in an attempt to end a late-season collapse. Remember how that turned out?

In any case, Bill Hall will likely clear waivers. At the Major League minimum, he might be worth auditioning for a 2010 job. Not as a starter, mind you, but in a super utlity role. I would not expect him to stop swinging and missing, nor would I expect to see him hit 35 homeruns again. But he brings other things to the table — namely, versatility, a good glove, strong fundamentals, hustle, and occasional pop. He is a younger version of Fernando Tatis, and someone who would be nice to have on the bench.

But, I think that another team in contention will take a chance on Hall for exactly that reason. In addition, he is an emotionally driven player, and will be motivated to prove the Brewers wrong. My bet is he signs with someone like the Cubs or Cardinals and has a big September, doing just well enough to fool some team into signing him to a two-year deal over the winter. (Not unlike the time Scott Schoeneweis parlayed the end of the 2006 season into a 3-year, $11M contract.)