What To Do With Billy Wagner (and JJ Putz) 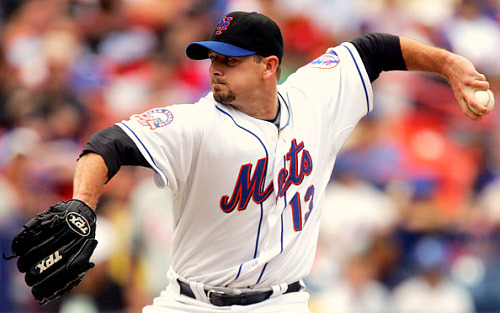 Reports are that Billy Wagner is throwing 94 MPH and, barring a setback in Florida on Friday, could return to Flushing as soon as Sunday.

Naturally, the plan will be to showcase the lefthander, in the hopes of pulling off a late-season trade. But it should also be an audition for next year.

If Wagner can consistently approach the mid-90s with his fastball, and get big league hitters out, a number of contending teams will be calling. The Mets should not be so quick to dump Wags for the best offer presented. Rather, they should set a price — a prospect, or package of prospects, that meet or exceed a specific set of requirements.

While it’s true that prospects are at a premium in this economy, there are a number of teams fighting for postseason spots. What does every single team need? Bullpen help. Every contending team can use the services of a healthy Billy Wagner — in fact, he could be seen as a difference-maker down the stretch. The Tigers, Cubs, Cardinals, Phillies, Marlins, Angels, Rays, Giants, and Rangers have all had question marks at closer, and might consider Wags in such a role. But even if Wagner can’t be expected to close this year, all of the aforementioned plus the rest of the contenders would be interested in adding someone of his experience and skillset to their 7th and 8th inning options. One of those teams may be desperate enough to give the Mets a worthy return — something, for example, more worthy than the pittance they received for a still-dominant Armando Benitez at the deadline in 2003.

The key to the negotiation — assuming Wagner proves healthy — is that the Mets would need to be serious about picking up the lefthander’s option for 2010. In fact, I believe the Mets should pick up the options on both Wagner and J.J. Putz — IF they both show they are healthy and pain-free. Crazy, right? Not really … let me explain.

First, the free agent market this winter won’t have many top-flight relievers available. The best of a woeful bunch are the ageless Trevor Hoffman, questionable Kevin Gregg, Mike Gonzalez, and Jose Valverde. That’s not much for the above-mentioned teams to bid for, which means most of them (as well as a number of other teams) will be exploring the trade market for 2010 bullpen help. If the Mets can’t get what they want in return for Wagner now, it’ll be because teams are unsure of his health and don’t want to give up value for a one-month rental. But, if Wagner and Putz throw well in September for the Mets, and they’re under contract for 2010, teams will be more inclined to give up valuable assets in order to obtain them.

The options on both are not unreasonable if they’re healthy — for Putz it’s $8.6M, for Wags it’s $8M. If the Mets kept both and K-Rod for 2010 they would have perhaps the greatest bullpen of all-time, but also the most expensive. They’d also have teams banging on their door on a daily basis with trade offers — a big contrast from previous years.

Now let’s consider the alternative — assume the Mets buy out the options, at a cost of $2M. For those of you pining for oodles of draft picks, you may be disappointed. Because the Mets might not offer arbitration to either pitcher (for fear of the player accepting), in which case the team would not get a compensatory draft pick. Further, if they do offer arbitration, it’s denied, and the player signs with a club that one of the 15 worst in MLB (that’s half the league), then all the Mets get is a supplemental pick and a second-round pick (for Wagner, who is expected to be a Type A free agent). It is this possibility that motivates the Mets to trade Wagner now — the idea being that they’d rather get something now than nothing later.

Speaking of, did you know that J.J. Putz currently projects as neither a Type A nor Type B free agent? So if the Mets let him walk, they definitely won’t get anything in return. So that huge deal from last winter will have been for Jeremy Reed and Sean Green. (And while we’re on the subject, Carlos Delgado is looking like a Type B — which will net the Mets a supplemental pick, IF they offer arbitration.)

Also, assuming the Mets are without Wagner and Putz, what does the 2010 bullpen look like? Does it look any better than the one we’re currently watching? Any improvement over 2008? Once again the Mets will have a solid (if nerve-wracking) closer, a reliable LOOGY in Pedro Feliciano, and five big question marks –the biggest one concerning the eighth inning. Bobby Parnell’s status as a possible starter doesn’t help that, and I doubt we’d be happy knowing Sean Green and Brian Stokes are the leading candidates. If there was someone on the farm worthy of consideration, he’d be here now. In short, the Mets will need to look outside the organization to improve the bullpen for 2010.

Close to $17M for two non-closers is a lot of dough, for sure. But the Mets will have Brian Schneider’s $5M and Delgado’ $12M coming off the books — so there’s the money right there in the event they can’t move one or both of the relievers over the winter. I doubt the Mets are going to be bidding on the services of people like Matt Holliday or anyone else of consequence anyway, so it’s not like they’ll need that money for something else. There are enough overpriced garbage contracts (for example, Fernando Tatis $1.7M, Alex Cora $2M, Tim Redding $2.2M, Livan Hernandez $1M) going away to swap for lower-priced roster fillers.

Again, everything hinges on the health of both Wagner and Putz. Certainly, it is a gamble to hold on to both. If the Mets can get something significant for Wagner right now, then by all means do it, it’s a no-brainer. But if the return is a nondescript A-baller, then why not hang on to him, and pick up his option, as well as Putz’s (again, if he’s healthy). It wouldn’t be the worst thing to have too many quality arms in the bullpen. For once, the Mets would be entering the winter meetings in a position of strength.

Back Cavalry Updates
Next The Dan Murphy Myth