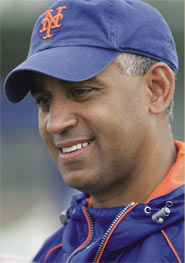 In what could develop into a ridiculous controversy — but is more likely a writer grasping for straws in chasing a story, Florida Sun-Sentinel writer Juan C. Rodriguez exposed the fact that Omar Minaya was chatting with Miguel Cabrera prior to Tuesday night’s game between the Mets and Marlins.

“Marlins President David Samson and General Manager Larry Beinfest could not have been pleased at what they observed from the Shea Stadium visitors’ dugout Tuesday.

While the Mets were taking batting practice and the Marlins were stretching, Mets General Manager Omar Minaya engaged third baseman Miguel Cabrera in about a 10-minute conversation.

Per Major League Baseball directive, it was tampering. Was Minaya recruiting Cabrera, a free agent after the 2009 season? Of course not, but the subject matter is irrelevant.”

C’mon, Juan … Omar Minaya is simply a friendly fellow, and in fact was seen sitting in the visitor’s dugout before Monday night’s game chatting it up with Beinfest himself.

Perfect example of a writer trying to stir the pot, instead of reporting the news.

(The article had no mention of the condition of Cabrera’s oblique, by the way.)

Back Mets Game 25: loss to Marlins
Next Milledge for Harden?