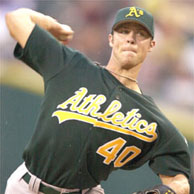 Rumor has it that the A’s are shopping Rich Harden.

Since we haven’t heard the Mets as part of the ploy to gauge interest in the enigmatic righthander, my guess is that there is an excellent chance of a trade taking place between Omar Minaya and Billy Beane. After all, Minaya’s — and Beane’s — deals seem to come out of thin air. Both organizations are tigther than a nun’s …. er …. tigther than a frog’s …. um …. let’s just say they subscribe to the theory that “loose lips sink ships”.

Taking a look at the current status of the Oakland A’s and the New York Mets, a Lastings Milledge – for – Rich Harden deal makes a lot of sense for both teams. The A’s have been decimated by several injuries to their outfielders, and recently made a desperation move to install Braves’ reserve OF Ryan Langerhans as their starting centerfielder. They’re tired of Harden’s myriad injuries, and want to unload him before his value drops considerably. The Mets have just lost Orlando Hernandez for an indefnite period, and despite Mike Pelfrey’s recent strong start are still in the market for a starting pitcher.

Of course it’s a gamble to obtain Harden, who is currently on the DL with a sore shoulder, but he is a rare talent — the kind of guy you feel good about starting in the first game of a playoff series, for instance. With his injury problems, compounded by the A’s desperation to shore up their outfield situation — both for the present and the future — a Milledge-Harden deal could be more realistic now than it ever was this past winter. We know that Beane is high on Milledge, and if he really believes Harden is on a Mark Prior-like path, he might be willing to do such a deal straight up.

Considering Harden’s age and upside, and the fact that Carlos Gomez could be ready sooner than we think, it would be a no-brainer for the Mets to pull the trigger. Yes, it’s a gamble, but so is thinking that Milledge will some day be the next Gary Sheffield. At least Harden has proven success — dominating, in fact — in the Major Leagues. Milledge, on the other hand, has yet to impress at the AAA level.

Back Mets Recruiting Cabrera?
Next MetsBlog on TalkRadio