Thank goodness. For a minute there, it looked like the Mets were going to get swept by the Fish in Shea — something that absolutely, positively, cannot happen. Ever. 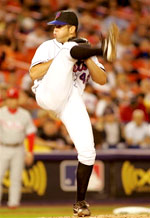 After giving up a quick run in the first inning, Oliver Perez kept his composure and pitched masterfully before running out of gas late in the sixth. He struck out 2 batters in each of the first five innings, finishing with 10 while walking 3 and allowing 3 hits. For a four-inning stretch, he was in a groove and downright dominating, retiring nine in a row at one point.

In an encouraging contrast to the last week and a half, the Mets offense showed some signs of production. In response to falling behind 1-zip early, the Mets quickly evened the score, courtesy of a leadoff double by Shawn Green and Ruben Gotay’s first hit as a Met. The offense had Anibal Sanchez on the ropes in that second inning, loading the bases, but not until after depleting two outs, and Carlos Beltran popped up to end the inning.

In the fourth inning, Oliver Perez helped himself by bouncing a leadoff single past a diving Dan Uggla and into right field. Anibal Sanchez flaked out and made a pickoff attempt with first baseman Aaron Boone playing back, sending Perez to second. Moments later, Jose Reyes lashed a line-drive double to left field, driving in Perez with the go-ahead run. The Marlins continued their circus-like play, as Endy Chavez bunted back to Sanchez, who had a shot at getting Reyes at third but couldn’t wait for Miguel Cabrera to get there (Cabrera’s strained oblique isn’t helping his already lackluster defensive efforts), and as a result nearly threw the ball away in getting Chavez by a step at first. Carlos Beltran followed with a Texas Leaguer in front of rightfielder Joe Borchard to score Reyes and expand the lead to 3-1.

Ringling Brothers returned in the fifth, as Perez blooped another single, then made it safely to second when Dan Uggla played hackey-sack with the baseball on a routine double-play grounder by Jose Reyes. With both runners safe, pitcher then threw a wild pitch to advance them to second and third for Endy Chavez, who came through again with a two-run single. (Someone put a tent on that circus!) Carlos Beltran grounded out, moving Chavez to second base, and the Marlins walked Carlos Delgado intentionally. David Wright followed with a single to drive in Endy. It turned out to be the end of the Mets’ scoring for the day, and all they’d need to win the game.

Though they won the game, still problematic was the fact that the Mets left ten runners on base in the first four innings, scoring just three runs in the process. With that many people on, you have to find a way to push a few more runners home.

Shawn Green continues to stroke, stroke, stroke, burying any doubt about his abilities with the bat. He’s now hit in ten straight games, and is spraying the ball all over the field. The way he’s swinging the bat, I really would have liked to see him tee off on a 3-0 pitch with two outs and two runners on in the fourth — but he was taking all the way and eventually walked to load the bases. While, it would be wonderful if he could recapture the power that made him a 40-homer threat, but if he can continue getting good at-bats and poking line drives, he’ll be extremely valuable in the #6 or #7 spot in the order. He’s being very smart, understanding that he’s playing in a big, pitcher’s park, getting into batter’s counts, and hitting the ball where it’s pitched — rather than trying to force the ball over the fence. Let’s hope he can keep it up the Tony Gwynn impersonation over the next five months.

David Wright had two more hits, and nearly a third, and appears to be out of his slump. However, he made two errors in the game, including on in the sixth that allowed two runners to score.

Oliver Perez went 2-for-2 with 2 runs scored and a sacrifice bunt.

Ruben Gotay had a nice debut, driving in the tying run in the first and taking charge on popups in no-mans-land in short right-center.

Mighty Joe Smith came on with two out and two on in the sixth to strike out Mike Jacobs on four pitches to end the Marlins threat and preserve Ollie’s win. This guy is unbelievable. Smith also had his first Major League at-bat, and though he didn’t look great, he took a healthy hack on the first pitch. He got into a bit of trouble in the 8th, but it was to be expected — he’s been pitching nearly every day for the last two weeks, and threw 37 pitches in this game. He’ll likely get a day or two off after this lengthy appearance.

Interesting that in a “must win” game, Willie Randolph hung with the rookie Smith as long as he did, with veterans Scott Schoeneweis and Pedro Feliciano well rested. An unusual, strong vote of confidence from Randolph, who tends to be wary of trusting rookies in tight situations.

It took Billy Wagner 11 pitches — 9 for strikes — to close out the game.

Mets pitchers retired the leadoff batter in every inning. That’s one way for a pitcher to make his life easy.

The Mets travel cross-country to begin a three-game series with the Arizona Diamondbacks on Thursday night.

Back MetsBlog on TalkRadio
Next John Maine and the BABIP Mystery