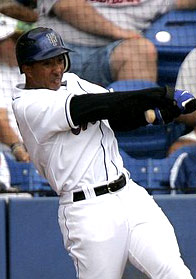 Why the heck did the Mets sign Damion Easley?

That’s what I was thinking back in mid-November of last year. Here was a little guy with a loopy swing, washed up for five years now. He wasn’t particularly adept with the glove, and not terribly versatile, either. Why were the Mets in such a rush to sign this “never-was”, when guys like Mark Loretta and Adam Kennedy were available?

A few minutes later I recalled similar thoughts from around the same time the previous winter, after the Mets signed Jose Valentin for no logical reason.

After a mostly ordinary, often lackluster career — save for a three-year, 20-homer per season spurt — Damion Easley suddenly has a flair for the dramatic. And that loopy swing is connecting at precisely the right times.

With one out and two men on in the ninth, Easley lifted a 2-0 pitch into the leftfield stands to put the Mets ahead 6-4. The blast came against Jose Valverde, who had previously been nearly perfect in the closing role, saving 10 games in 11 chances and entering the game with a marvelous 1.64 ERA. The go-ahead homer, however, clearly affected the volatile Valverde, as he then walked Julio Franco and allowed a base hit to Jose Reyes before being removed from the game. His successor didn’t do much better, giving up an opposite-field homer to David Wright to put the game away for good.

Though it turned out to be an exciting, come-from-behind victory, the Mets nearly gave the game away.

They say the great pitchers seem to get tougher as the game goes along — particularly after they are given the lead. The smell of victory — the blood of the fallen opponent — causes something extra to kick in, a competitive streak that sears the outside skin of the decision, sealing the win inside.

For some reason, however, Tommy Glavine didn’t get tough.

The game was reminiscent of a Glavine start in Atlanta last July, when he was given the lead four times, but handed it right back. Against the Arizona Diamondbacks last night, Glavine fell behind early, but the Mets came back in the fourth to give him a one-run lead. Minutes later, he gave away the lead via a two-run homer to catcher Chris Snyder.

In the top of the fifth, Carlos Beltran evened things up with a prodigious solo homer to right-center. But in the bottom of the inning, Glavine gave up another dinger, this time to Orlando Hudson on a BP-like fastball over the middle of the plate, to untie the game. It was as if Glavine didn’t want to win. Maybe the 300-win thing is getting in his head, causing him to lose his focus

The ninth inning was a buildup of breaks that bewildered Jose Valverde, and may have caused him to lose his cool. First, a Shawn Green grounder bounced through Tony Clark’s legs, and then Paul LoDuca had a tough at-bat, working the count full and walking on a close pitch off the outside part of the plate. Valverde seemed to disagree with several of the ball calls — though they weren’t close enough to bicker about — and after walking LoDuca fell behind 2-0 to Easley. Ten saves or not, Valverde is still a head case.

Is Carlos Delgado ever going to hit again? Besides these little singles, I mean. At some point, Willie Randolph has to acknowledge that this man is in a slump. He’s not hitting the ball hard anywhere, and in fact is swinging and missing at an astonishing rate. And it’s not as if he’s getting fooled — he’s getting beat, he’s swinging over, he’s swinging under. Hopefully he and Rick Down will check out some video and notice that Carlos’ head is moving too much when he strides and begins his swing, in turn causing the ball to “jump” and leave his line of vision. A lighter stride step will keep his head “quiet”, and he’ll get a better, longer look at the pitch coming in.

Speaking of mechanical flaws, Aaron Heilman’s arm action is now identical to Joe Smith’s. But we’ll keep believing Willie’s mantra that it’s a phase Aaron needs to work out of, or that it’s mental, or he’s simply “getting the ball up”. And no, I don’t particularly care that he pitched a 1-2-3 eighth inning and received credit for the win — the ends do not justify the means in this case.

After going 2-for-2 with a walk, Moises Alou left the game because of a sore knee. Great. A split lip, a sore shoulder, now a bum knee. And it’s only the first week of May.

Shawn Green’s 10-game hitting streak came to a quiet end, though he did walk once and reach on the error by Clark. He also made an outstanding diving catch in the bottom of the ninth, eliciting a big hand from the hometown crowd.

John Maine faces Randy Johnson at 9:40 PM EST. If Maine can continue his recent dominance, it would be a major shot in the arm for the Mets, as the last two games of the series will be tough. The D’backs will send their best two starters — Brandon Webb and Livan Hernandez — against someone who hasn’t made an MLB start this year and the shaky Mike Pelfrey. A bit of momentum going into the third game against Webb will be a big lift for the Mets.

Back Series Preview: Mets vs. Diamondbacks
Next Mets Pitching Moves