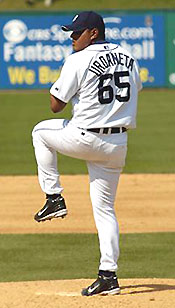 In an unsurprising move, the Mets designated Chan Ho Park for assignment after his awful start on Monday. As bad as he was, the New York Yankees would be silly not to at least take a look at Park, considering the injuries that have devastated their starting rotation. Heck, Jose Lima should be asking the Yanks for a tryout.

In a slightly surprising move, the Mets also promoted Lino Urdaneta from New Orleans. As you may remember, Lino’s career ERA is infinity, so we all hope he gets into a game and retires at least one batter, so he can have a number instead of “INF” on his pitching line.

Actually, I’m hoping he gets into a game for a better reason — he may be able to help the Mets bullpen. Urdaneta had a strong spring training, showing good command of a fastball in the upper 90s, and could be further along than Ambiorix Burgos. At this point, it’s doubtful Burgos would be sent down — he’s Rick Peterson’s pet project — but it would be encouraging and helpful to find out that Lino Urdaneta can get big league hitters out. At some point in the season, someone (Heilman?) is likely to suffer an injury, and having Urdaneta step in would be nice insurance and a great story.

Most likely, however, Urdaneta will find himself back in N’awlins come Saturday, when the Mets must put someone on the mound in the first inning to face Brandon Webb and the Diamondbacks. Unless the Mets choose to start Aaron Sele on Saturday, it is likely that Jorge Sosa will be promoted and Urdaneta sent back down before he gets a chance to unpack his suitcase.

However, Sosa is scheduled to start tonight in New Orleans, so we’ll know for sure if it will be Sosa or Sele before the Mets and Diamondbacks do battle tonight (obviously, if Sosa gets pulled, he’s coming up). FYI, Jason Vargas pitched on Thursday, and Philip Humber started on Wednesday, so neither of those youngsters is an option for tomorrow’s start.

If indeed Sele gets the start, and does well, Urdaneta may have a chance to stick around for a few more days. With Jorge Sosa pitching lights out in AAA though, Urdaneta will have to pull off a quick string of Mike Jacobs-like performances to stay on the 25-man roster. Who knows — with his electric fastball, anything can happen.