Where They Are Now: Ezequiel Carrera 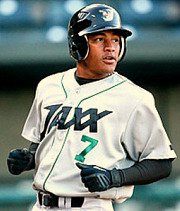 This afternoon I received an email from the Southern League announcing that Ezequiel Carrera of the West Tenn Diamond Jaxx had won the batting crown.

I’m thinking … “hey, that name sounds familiar!”. Of course it does — Carrera was one of the two dozen players traded by the Mets for Sean Green last winter.

The speedy centerfielder finished the year with a .337 AVG, and also led the league in on-base percentage with a .441 clip. The 22-year-old Venezuelan native also stole 27 bases.

Of course, the Mets are set in centerfield through 2011 with Carlos Beltran, so if the Mets held on to Carrera he wouldn’t have a shot to make the club until he was at least 24 years old. And even then, there’s a good chance Jose Reyes will still be around to man the leadoff spot.

Further, anything can happen between now and then. Carrera’s batting crown is for the Southern League, which is AA ball. Some players can make the jump from there to the bigs but Carrera will likely have to prove himself for at least another year — either by repeating AA or in AAA next season. And truth be told, Carrera is a slap hitter with speed and a good glove — along the lines of a Luis Castillo. In other words, not a potential superstar. Still, thought you’d be interested to see how a former property of the New York Mets performed this year.

Back Mets Get PTBNL from Red Sox
Next Mets Game 138: Loss to Marlins