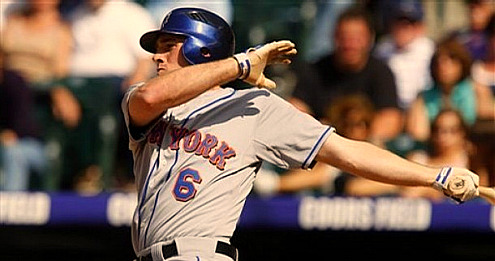 Inside the Mets’ clubhouse on Sunday … Nick Evans was showing off a photograph capturing perhaps his most memorable moment of the season — when he met his comedic idol, Jerry Seinfeld, at Citi Field. “It’s up there,” Evans said.

For all intents and purposes, the Mets season was over by mid-July. Jerry Manuel had given up at least a month before that, as did a large portion of the fan base. Yet, in the last three months of the season, we had to watch Fernando Tatis, Cory Sullivan, and even Emil Brown get at-bat after at-bat while Evans wallowed in Buffalo or languished on the Mets’ bench (or in the bullpen!).

When it was all said and done, the 23-year-old first baseman / outfielder appeared in 30 ballgames and enjoyed 65 at-bats at the big-league level, hitting .231. The fact he made it to MLB was a feat in itself, considering that he began the year 7-for-75 in AAA — prompting a demotion to extended spring training and a spot on the couch of a sports psychologist.

But Evans fought back, hitting .276 in AA Binghamton before returning to Buffalo and getting 43 hits in his last 162 (.265) at-bats before joining the Mets 25-man roster.

Hitting .260 or .270 in the minors isn’t exactly awe-inspiring, and Evans has yet to deliver on the scouting reports that claim his best tool is a power bat — he’s never hit more than 15 homers in a season. But when your MLB team is going nowhere, it has a desperate need for a power-hitting LF / 1B, and a prospect who fits that description is on the roster … well, why in the world would you let him rot on the bench? Either play him or leave him down in the minors to get more at-bats.

Instead, Evans kept Jeremy Reed company in the dugout for the month of September and first few days of October. He stepped up to the plate 18 times in that time, collecting 4 hits and a walk.

So where does Evans fit in for the 2010 season? Since he wasn’t part of the auditions in September, we have to guess he’s starting the year in AAA Buffalo. Which is fine, as he does need to prove himself in the minors and work out some issues — such as his difficulty with righthanded pitchers. And then there’s the catching experiment — which is a little late for someone this far in his career, but could end up helping him stick in the bigs.

But still, you have to wonder what it was that Nick Evans did for the Mets to go from counting him as a top prospect in the spring to casting him aside in September.