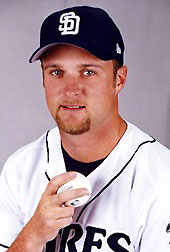 All of New York was buzzing after the signing of a certain veteran righthanded pitcher this past Sunday … today we finally catch up with the newest Met, Brian Lawrence.

MetsToday: After a flurry of cameras, microphones, and questions thrown in your face over the last few days, how does it feel to be at the center of attention in the largest media outlet in the world?

Brian Lawrence: “Yeah, New York sure is unique in that respect. I’m not one to bring attention to myself, so it was a little overbearing. Generally I prefer to keep a low profile, let my pitching do the talking.”

MT: It was pretty emotional from the perspective of a New York Mets fan. And surely your former teammate Oliver Perez shed a tear. What were you feeling when the announcement was made by Omar Minaya?

BL: “In all honesty, all I could think about was eating. I’d been on a plane all day, and you know how that food is in business class — a bag of peanuts and a cold turkey sandwich doesn’t do much for a big dog like me. As for Ollie, we haven’t spoken since 2002, and back then his english wasn’t too good.”

MT: Well you’ll have plenty of fine restaurants to choose from in NYC. Besides the food (ha ha), and the reunion with Perez, what made you choose the Mets over other suitors, such as the Tigers, Orioles, and Padres, for example?

BL: “Well it obviously wasn’t about the money — as Detroit made a higher offer. It was more about finding the right organization, the right fit for both parties, and making sure my family was on board with the decision.”

MT: Speaking of family, you declined a “family values” clause that would have enabled you to travel home when you weren’t pitching.

BL: “Yeah, that was a nice gesture by the Mets management, and shows why they are a class organization. They know my family is back in Colorado, having already moved twice in the last two years. But it’s not fair to the team, and with all the money we make as big leaguers, being away from family — or having them move around with you — is part of the deal.”

MT: Team is important to you.

BL: “Hell yeah. If it were all about me, I’d be playing tennis, or on the PGA Tour.”

MT: What about critics who consider you a “hired gun” or a “mercenary”, and the complaints that the Mets are simply trying to “buy a pennant” ?

BL: “I suppose people could look at it that way, but I’m in this for the long haul. This isn’t about just 2007 — I’m hoping to help the team for a few years. As far as the Mets buying a pennant, people will think what they want to think.”

MT: At this stage in your career, you’re not much more than a six-inning starter. That said, do you think you’ll make a significant contribution to the Mets?

BL: “As much as I hate to admit it, that’s a very fair question. I didn’t gallop here on a white horse, I came in a Hertz-rented Chevy. I’m not some kind of savior — I put my pants on one leg at a time just like anybody else. All I can do is try my best to give the team quality innings and do whatever is needed to get a ring.”

MT: Coming off shoulder surgery, it’s going to take some time in the minors to build up your strength. How long before you’re ready, and when do you expect to be called up?

BL: “I don’t expect anything. I’ll continue stretching out my innings — god willing — and do everything I can to get back into the shape I was in 2002-2005. Whatever happens from there, is dependent on my progress and the Mets’ needs.”

MT: Assuming you win a World Championship here with the Mets, will you petition the Hall of Fame to be inducted as a Met? Or will you go in with the Padres hat — the team with which you made your mark?

BL: “Getting inducted into the Hall of Fame is such a high honor, I’d be OK if my bust had a triple-propeller beanie hat (laughs). In all seriousness, the Hall of Fame is not about me, it’s an institution for the fans and generations of fans long after we’re all gone and forgotten. So whatever the Hall wants to do, is fine by me.”

MT: Thanks for taking time out from your hectic schedule to meet with us. Good luck on your road back to the bigs.

Back Mets to Make a Deal?
Next Mets Game 32: Win Over Giants