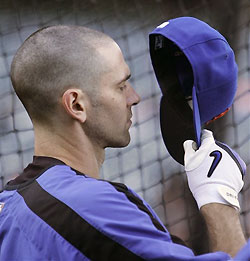 The Few. The Proud. The Mets.

The United States Marine Corps would have been proud to see the Mets — 21 of them, anyway — shave their heads in an expression of their dedication to each other as a single unit, a team. (Jose Reyes, Tom Glavine, Aaron Sele, and Aaron Heilman chose to remain individuals, but we’ll see how long that lasts.)

Their attempt to resurrect the spirit of Chris Woodward seemed to have a positive effect, as the Mets finally handed Tom Glavine his 294th career win.

The Mets got off to a quick start on Matt Cain, scoring three runs in the first and adding a fourth in the second. They looked very comfortable at the plate the first time through the lineup, as if they knew what was coming. Maybe Cain was telegraphing his pitches? If he was, he corrected it by the third, but not before falling behind four zip.

Cain was bombarded by three straight doubles to start the game, stroked by Jose Reyes, David Wright, and Carlos Beltran. Those two-baggers resulted in two quick runs, and a third came home on a sac fly by Moises Alou. In the second inning, Paul LoDuca led off with a line drive single, and was driven home for the fourth Mets run on a triple by Reyes. Those four runs were more than they needed, and held up through the end of the game.

The early damage done to Cain seemed to deflate the Giants, who looked as if they were trying to get the game over with, rather than competing. Of course, it didn’t help that future hall of famer Tom Glavine was having one of his special nights.

Glavine’s changeup was “on”, and he spotted it well with the fastball and curve to keep the Giants off balance all night. Once, he mixed in an El Duque-style, eephus-like, 60-MPH curveball to fluster Barry Bonds. Even when ahead on the count, the Giants batters were making defensive swings, trying in vain to simply put the bat on the ball. It was a truly “vintage Glavine” evening.

It was slightly surprising to see Damion Easley starting with the righthander on the mound and the switch-hitting Ruben Gotay available. Most likely, Willie Randolph put Easley in the lineup partly because he’s a trusted veteran, and partly because he made an error the night before. By starting Easley a day after botching an easy grounder, Willie was giving Easley an opportunity to make amends, and also avoiding any press-invoked controversy. In other words, he didn’t want to send the signal that making an error means you’re benched.

However, it’s pretty clear to most observers that Easley is, shall we say, “challenged” in the field. Even his prime, he was never confused with a Gold Glover, and hasn’t improved with age. Considering that the Mets made such a big deal about starting Anderson Hernandez because of his defense at the beginning of 2006, it’s strange that they’re not giving the similarly slick fielding Ruben Gotay more of an opportunity. Hopefully he’ll be more than the commissary second baseman on day-game-after-night-game / Sunday afternoons, as it could be exciting to see Gotay fulfill the so-far unrealized potential suggested as a Kansas City Royal.

Shawn Green — who with the buzz cut now resembles a serial killer — hit bullets all over the field but right at people. He was hitless but is still hot.

Wright and LoDuca, on the other hand, were hot and their line drives found holes. Paulie sprayed hits to all fields while Wright made a point of mashing the ball up the middle and to the opposite field. The instigators of the buzz cuts were a combined 5-for-8 on the night.

Carlos Delgado looked to be coming out of his slump with a few hard-hit line drives over the past few days, but his head is still too “noisy” as he takes his swing. If you watch closely, you’ll see his head rise up as he brings his hands forward — and the rest of the body follows the head. The vertical head movement is causing three things: first, it’s not allowing him to get a clear look at the ball; second, it’s turning his swing into a more pronounced uppercut; and third, he’s opening up his hips too early, and pulling off the ball. All of these issues, however, may be symptoms of his timing being off. The fact that he’s swinging under the ball (in most cases) suggests that he’s late on pitches — and therefore trying to speed up his body to catch up to the pitch. In other words, he’s jumping at the ball. Hopefully, he’ll soon get his timing down and get back to mashing the ball on a consistent basis, instead of once every two games.

One more Left Coast contest, thank the lord is it an afternoon game. John Maine faces Matt Morris at 3:35 PM EST — set up your DVR and watch it when you get home from work.