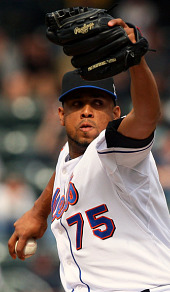 After Francisco Rodriguez set an all-time record for saves in a season on the Left Coast, he went cross-country to the Right Coast to cash in with a 3-year, $37M contract from the very desperate New York Mets — desperate because they had suffered their second consecutive collapse in the final days of the season, and all fingers pointed to ineffective relief pitching as the culprit. Surely, the best closer in baseball could make the Mets problems go away.

As fate would have it, the Mets faced many more, and bigger problems than the bullpen in 2009. Injuries to top players, awful starting pitching, mental lapses, and terrible fundamentals overshadowed the fact that K-Rod was a disappointment.

No one can blame Frankie Fantastik for falling short of another 60-save campaign — he had only 42 save opportunities. But he DID match another save figure from his record-breaking campaign — 7 blown saves. More alarming, his ERA increased by a run and a half, and his losses doubled. Usually, pitchers who move from the AL to the NL enjoy an improvement in their overall numbers. Not so for K-Rod.

A few reasons can explain Frankie’s inauspicious NL debut. The most obvious is he is starting to wear down — though only 27, 2009 was his seventh full season as a big-league closer. When in his early and mid-20s, K-Rod’s fastball consistently rode in the 95-97 MPH range, occasionally flirting with 98. This past year he was usually in the 92-93 range, touching 95 every once in a while. K-Rod claims the drop in velocity has to do with improving his command and masking his outstanding change-up. Maybe so. The raw stats tell us that he’s giving up about as many hits and walks as he always did — his 1.30 WHIP in ’09 was nearly identical to the 1.28 mark posted in ’08. One thing jumps out, though — his average pitches per inning jumped to 18.3, from 17.1 in ’08 and a career average that was previously in the low 16s. Bottom line is that Frankie always allowed too many baserunners, but now he’s having a slightly harder time pitching out of those jams.

Even with a slight drop in velocity and slight increase in hittability, K-Rod is still among the elite closers in baseball. The key to his success is in the way he’s managed.

Under Mike Scioscia, Rodriguez almost never was asked to pitch more than three outs — in fact he never retired more than three batters in 2008. Further, Scioscia didn’t like to use Rodriguez three games in a row. Jerry Manuel, on the other hand, had K-Rod pitch multiple innings four times during the year, and used him FOUR games in a row on two occasions in the month of May. In 2008, K-Rod exceeded 28 pitches in an outing only once. In 2009, he threw 30 pitches or more 7 times — including two appearances of 40+ pitches.