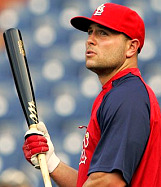 According to Ken Davidoff, free-agent-to-be Matt Holliday’s first two choices are the Yankees and Mets.

It’s no surprise that the New York Yankees tops his list. They do, after all, have the deepest pockets in MLB — and will have over thirty million dollars coming off the books this winter when the contracts of Hideki Matsui, Johnny Damon, Xavier Nady, and others expire. Assuming the Yankees allow all three of those individuals to walk, they’ll have a big hole in left field. Telling the world he’d like to fill that hole immediately gets the Red Sox involved in the bidding, driving up his price further.

With the Mets it’s a similar situation. Does Holliday really want to play in Flushing, or does he merely want the Mets to help increase the bidding? Sounds like a calculated move — if the Mets do in fact make a bid, the Yankees would be obliged to make a slightly higher offer, and in turn the Red Sox need to raise their offer as well.

You may recall a similar drama played out in the 2004-2005 winter with an outfielder named Carlos Beltran. Go back a few more years and there was another involving Alex Rodriguez.

In recent years, the Mets have shied away from bidding on Yankee targets. For example, the Mets completely ignored C.C. Sabathia last winter — a pitcher they desperately needed — and never considered entering the bidding for Mark Teixeira. But last year, they had hyped-up excuses not to go after either of those individuals: the general consensus was that the Mets needed to beef up the bullpen. At the time, the Mets could get away — publicly — with relying on Johan Santana followed by a band of question marks, and in picking up Carlos Delgado’s option. Short-sighted, band-aid applications that appease the public have been the Mets’ strategy for past decade.

But now, the Mets have several band-aids to apply — and one of them is in left field. The public insists that they need to add a big bat in the middle of their lineup. Further, Jeff Wilpon has publicly stated that the Mets are financially strong, and Omar Minaya will have no limits in regard to budget.

If it’s true that Holliday has the Mets on his list, then Wilpon has no choice but to enter the bidding. He has been cornered by his own words, and in turn compromised his negotiating position.

Once again, the Mets have managed to muck something up — and the free agent parade has yet to begin. Weeks before the filing period, the most difficult negotiator in sports — Scott Boras — has mountainous leverage against the Mets. Already, Boras has the upper hand. The Mets may end up with Holliday in the end, but not before overpaying — dearly — in terms of dollars and years.

You can guess how this drama will play out.