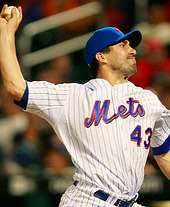 Many Mets fans may be surprised to learn that Brian Stokes appeared in 69 games this past season — but the final record says he did.

Stokes was roleless throughout the season, or perhaps the better descriptor was “everyman”. He was used as a long man, a short man, a mopup guy, a setup man, in middle relief, and as a situational / matchup guy. Strangely, the only thing he didn’t do in 2009 was start.

There were times that Jerry Manuel used Stokes in back-to-back games, and three games in a row, and just as many times when Stokes went a week or more without appearing in a game. Manuel and Dan Warthen seemed unable to figure out where Stokes fit into the plans.

But, previous managers and coaches have been equally confused about Stokes. The 30-year-old righthander has been an eternal enigma from the day he signed a pro contract, shifting from the bullpen to starting and back to the bullpen, all the while impressing onlookers with a 96-97 MPH fastball and a full arsenal of secondary pitches. Yet, with those tools, he’s been able to strike out only 121 batters in 190 MLB innings.

Stokes has two major problems. First, his fastball is usually straight as an arrow. Second, his curve, slider, split, and change are all equally inconsistent, but show promise. If he had just a little sink or lateral movement on his fastball, and/or could transform one of his other offerings into a plus pitch, he’d be an ideal setup man. He has the assortment of a starting pitcher, the velocity of a reliever, but expertise in neither.

I like Stokes’ raw talent and his demeanor. He doesn’t appear to lose his focus in the face of adversity, and he’s fairly aggressive and confident in pounding the strike zone. If I were Dan Warthen, I’d work on his fastball grip, insist that he choose one secondary pitch to focus on, and pencil him in as a 7th-inning reliever. And then, I’d ask Jerry Manuel to give the guy regular work, and see what happens.

Back Holliday List Includes Mets
Next New Neighbors for Mets?