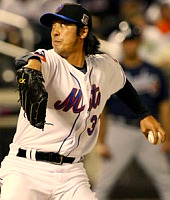 Ken Takahashi is the lefthanded version of Elmer Dessens: a well-traveled, international man of intrigue, with ordinary stuff, who won’t embarrass himself — but won’t have much of an impact on a championship club, either.

The Mets were in dire need of another lefthander for the Jerry Manuel Matchup Strategy of late innings management, but it turned out that the 40-year-old Japanese southpaw pitched better against righties (.156 batting average against) than vs. lefties (.302). That put a major wrench into Manuel’s plans, and made it difficult for the push-button manager to figure out how to use Takahashi.

In some ways, Takahashi resembles Darren Oliver — another lefthanded starter turned reliever who pitched better against righthanded hitters. In 2009, Takahashi’s role was stopgap — pitching for the big league club mainly by default — no other options were available. Will he be with the Mets come spring training in 2010? Not likely, but you never know with this organization.

Back New Neighbors for Mets?
Next 2009 Analysis: John Maine