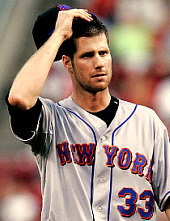 When May rolls around next year, John Maine will be 29 years old. That said, you can no longer look at him as a young pitcher on the rise.

Even before the injury, Maine was regressing — though, that could have been due to the injury itself. Despite a 15-win season in 2007, Maine never really had strong command of his fastball, his breaking pitches were inconsistent, and his change-up was below average.

What Maine had going for him was a 96-MPH rising fastball that many undisciplined hitters could not lay off of. If that velocity doesn’t return, what does Maine have going for him?

As mentioned many times on this blog, Maine’s mechanics prevent him from consistent command of his pitches.

Let me be clear on one point: John Maine is one of my favorite Mets. I absolutely love his cool and fearless demeanor on the mound. I want very badly for John Maine to succeed. But I won’t let that emotional tie to cloud my judgment — which is the fact that Maine is a huge question mark, even if healthy.

Despite his questionable health and command issues, the Mets have little choice other than to keep Maine around for 2010. He’ll be due a raise through the arbitration process, but as long as there is a dearth of pitching at all levels of the organization, the Mets can’t afford not to hope for a rebound by John Maine. Even without his velocity, he showed enough in 2009 to prove he could be a solid #4 or #5 MLB starter — and that’s nothing to sneeze at. With a little luck, and a little improvement, he might be able to elevate himself into the stratosphere he floated in 2007. But counting on that optimism is irresponsible; better to pencil him in for the back end of the rotation, and be pleasantly surprised if he exceeds expectations.