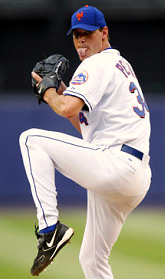 It seemed that Mike Pelfrey turned a corner the moment Dan Warthen became pitching coach in late June of 2008. When that fallacy is combined with his final numbers — a 13-11 record and 3.72 ERA — many believed Big Pelf had finally matured, and was on the verge of a “breakout season”. Indeed, some pundits penciled him in as the Mets #2 starter when the 2009 season began.

The truth lies somewhere in between, and to find it, one needs to begin looking at his 2008 season objectively.

The more astute Mets fans are aware that Dan Warthen had little or nothing to do with Pelfrey’s “turnaround” in 2008. Rick Peterson was the pitching coach when Big Pelf beat the Phillies in his first start of the season, and when he threw 7 shutout innings in his second start. Pelfrey was wildly inconsistent over his next 7 starts, two of which could be graded as excellent. The “roll” began on May 31 with a 7-inning, 2-run performance against the Dodgers, and continued with a stretch of excellence in 8 of his next 10 starts — during which Warthen took over in the middle.

You may be surprised to find out that Mike Pelfrey had a lower ERA and a better won-loss record in the first half than the second half of 2008 (though his WHIP and batting average against both improved). Much of that was due to a mild setback in September, when he was 0-3 with a 4.06 ERA.

Nonetheless, Pelfrey did absolutely improve dramatically in 2008 compared to 2007. But did he really go backward in 2009?

A harder look at the final numbers, as well as the game logs, suggest that Pelfrey was a similar pitcher in 2009: inconsistent, with equal bouts of dominance and disasters, balanced by outings that could be described as “average’. The main difference between the two seasons was that he had a few more stellar outings in ’08.

Looking at the final stats for both seasons, two things jump out: double plays and batting average of righthanded hitters. Pelfrey induced exactly 337 ground balls in both ’08 and ’09, but only 15 were turned into double plays in ’09, compared to 29 in ’08. Considering that Pelfrey allowed a similar number of baserunners in both seasons (273 in ’08, 279 in ’09) — but pitched 16 fewer innings in ’09 — you can appreciate how much the double play can impact his performance. Fourteen less DPs means at least 14 more batters faced, and more pitches, and likely more runs, and so on. Add in the “yips” factor that affects Pelfrey from the stretch, and suddenly we have a theory for the rise in ERA. (Batters hit .325 against Pelfrey with runners on in 2009 — about 50 points higher than in 2008.)

Also hurting Pelfrey in ’09 was that righthanded hitters batted .293 against him — nearly 50 points higher than in ’08. I’m not sure of an explanation on that one, but if I had to guess I would say it was related to his throwing more four-seam fastballs in the middle of the strike zone and not enough bat-breaking sinkers that move down and in on the RH hitter’s hands (which would also help explain the downward trend in DPs) — but that’s only a theory.

Aside from those two eye-poppers, most of Pelfrey’s final stats are close to identical when comparing 2008 to 2009. I’m not sure whether that’s a good thing or a bad thing; I suppose it’s good in that he didn’t go as far backward as it appears on the the surface. Further, you can’t be too disappointed in a pitcher who goes 7+ innings 11 times and wins 10 games on a club that finished 70-92. Put Pelfrey on a 90-win team with a stronger offense and he might have pulled out a 12-14-win season.

But what about 2010? Will Pelfrey make a step forward, or has he hit a plateau? I sincerely believe he can make progress if he polish up one of his offspeed pitches, goes back to more frequent use of his heavy sinker, and learns to focus with runners on base. That’s not a whole lot to ask of a 26-year-old, and far from impossible. At the same time, it’s not fair to expect him to be a #2 starter in 2010 — though it wouldn’t be surprising if he evolved into that type of pitcher before the end of next season.

Back 2009 Analysis: Jonathan Niese
Next Can the Mets Use a Mental Coach?