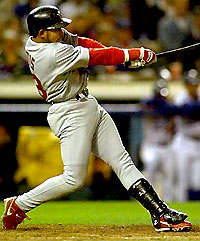 A few days after minor leaguer Jorge A. Reyes was suspended for 100 games for violating baseball’s drug policy for the second time, the Mets have another steroid-related issue to deal with.

The reasoning behind the request has not been reported, but it’s obvious that there is reason to believe that Mitchell’s agents suspect these players of using performance-enhancing narcotics.

After the revelation of former bat boy-turned-drug dealer Kirk Radomski, followed by the Reyes suspension, and compounded by the suspension currently being served by Guillermo Mota, the Mets appear to be falling deeper and deeper into darkness of baseball’s most embarrassing issue. So far, the organization has been able to skirt the subject. PR man Jay Horwitz deserves a gold medal for the remarkably effective damage control he’s executed thus far, especially considering that he’s operating in the most sensitive media outlet in the world. Though, his effectiveness is due in part to the fact that fans don’t want to hear bad news about their heroes. As juicy a story steroids may be, it simply doesn’t sell. Before finding out that a local hero is a user, New York fans want to hear that Barry Bonds has been brought to justice. The steroid issue is something people want unraveled away from home. Unfortunately, the deeper this story goes, the closer it’s getting to Flushing.

Back Mets Game 32: Win Over Giants
Next MLB: Please Stop the Madness!