The sabermetricians and naysayers were right: John Maine is not really as good as he’d been pitching before this game.

In this latest outing, the Giants bombarded him for 3 runs in six innings, shooting his ERA all the way up to 1.85. And here we thought we had the righthanded Sandy Koufax.

Maine’s command was something of a conundrum. He was throwing pitches that enticed batters to swing and miss, but he had a very hard time spotting balls in the strike zone. For example, his change-up was diving down and away from lefties all day, but he couldn’t throw it for a strike. As a result, he struck out 4 in row at one point but walked 6 (1 intentional).

Meantime, his adversary Matt Morris had the Mets in fits, using a nasty 12-6 curveball as his primary pitch. TV announcer Keith Hernandez guessed that Morris threw about 70% curveballs, and he may have been right. It was a brilliant strategy, especially since his deuce was definitely “on” — with so sharp a break that it fooled not only the Mets but the home plate umpire as well, on occasion. When he was removed after seven strong innings, it seemed at the time to be a curious move, as he was still dominating the Mets. Ah, but this is the 21st century, and pitchers aren’t allowed to remain in games beyond the 100-pitch limit (Morris threw exactly 100). As it turned out, it would be San Francisco’s undoing, as the Mets feasted on the fastballers who came out of the Giants bullpen.

First, they unleashed on Brad Hennessey, whose straightballs looked like BP to the Mets after being frustrated by Morris’ unhittable curve. After David Wright struck out, Carlos Beltran followed with a walk, then Carlos Delgado stroked a double on a 3-2 pitch with Beltran running. Beltran scored easily to tie the game. 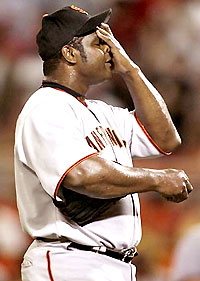 In the ninth, Giants manager Bruce Bochy made his second mistake, bringing in Armando Benitez to hold the tie. Longtime fans of the Mets remember the Meltdown Man well, and most of us breathed a sigh of relief to see him enter the game. Benitez in a tight game is like money in the bank for the opposing team, and he didn’t disappoint.

Paul LoDuca led off with a line drive single to left, but was erased when Pedro Feliz perfectly played Ruben Gotay’s sacrifice bunt attempt. Endy Chavez followed with a walk, and throughout the at-bat you could see Benitez beginning to unravel; he was visibly annoyed with the strike zone judgment of Bruce Froemming. The emotional volcano inside Armando erupted after a Jose Reyes pop fly dropped between rightfielder Todd Linden (brought in for defensive purposes) and second baseman Ray Durham to load the bases. As the lava poured out, Benitez threw three consecutive balls to David Wright, then laid two meatballs over the middle of the plate — the second of which was hammered into the leftfield corner to score Chavez and Gotay and put the Mets ahead by two.

Billy Wagner came on in the ninth and threw a perfect, uneventful inning, striking out two and using only 11 pitches in the process.

About an hour after Flushing University posted my profile on Ruben Gotay, Gotay blasted a homerun into the rightfield seats. I will take full credit the dinger, and consider it a good luck kiss.

It appears that Carlos Delgado is moving out of his slump, evidenced by his third-inning blast into the bay and his unbelievable opposite-field double that tied the game in the eighth. The double was hit on a low and inside pitch about an inch off the ground, and he couldn’t have hit it better with a sand wedge. Keith Hernandez thinks he’s still “too quick”, and I agree, to a point. Though his head, hands, hips, and weight are all in sync now, whereas before his head was pulling out early and everything followed in a clumsy way. Generally, you don’t want to be hitting off your front foot, as Delgado was doing, but if everything is in sync, it can result in good things — such as fly balls into the drink. That said, Delgado is on his way back, and should be stroking the ball to all fields soon enough.

Once again, Shawn Green was hitting bullets all over the place, but right at people, and he remains hitless while hairless. Perhaps Hernandez has something with the “don’t mess with a hot streak” superstition.

Paul LoDuca nailed two runners attempting to steal in the first inning, and has thrown out 9 of 15 this year. Big change from last year, and a long way from the Piazza days.

The Mets get a day off to make the cross-country trip back home. They open a three-game series with the Milwaukee Brewers at 7:10 PM at Shea. Jorge Sosa is scheduled to make his second start of 2007 against Jeff Suppan. I’ll be at the game; if you’re desperate to be there too, and think you can handle my non-stop yammering, I might have one extra ticket. Email me if you’re interested.

Check back here on Thursday afternoon for the series preview, which will include insights from a high-profile Brewers blogger.