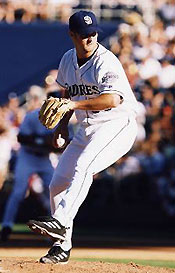 Just when all the hoopla surrounding Sunday’s emotional announcement was beginning to taper off, Brian Lawrence finds himself back in the spotlight, as his signing with the the New York Mets was made official on Wednesday.

According to manager Willie Randolph, Brian Lawrence will report to extended spring training and is expected to throw a bullpen session Tuesday in Port St. Lucie, Florida.

“From there a decision will be made when he’ll pitch a game,” Randolph said. “We’re not targeting a particular team for him. We’re not rushing him to be ready for a certain team. When he’s ready, we’ll pitch him.”

Pitching coach Rick Peterson added, “He’ll be on a strict, 75-80-pitch count when he returns.”

Check back here at MetsToday, as we’ll be keeping everyone updated on the big righthander’s progress and eventual return to Major League Baseball.

Back Mets Game 33: Win over Giants
Next Keppinger Resurfaces