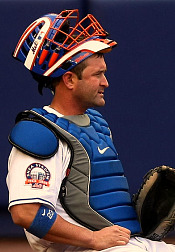 There was a time that Brian Schneider was an agile receiver with a great glove, strong arm, and the added bonus of some pop in his bat. In fact I can remember when Omar Minaya was GM of the Expos, and he supposedly spent every winter turning down offers for his young and promising backstop.

Those days are long gone, unfortunately. Today, Schneider is only about average behind the plate in all areas and well below average offensively. He has ten years of experience in the National League, and appears to be a bright fellow, so we can assume he has a “book” on most opposing hitters. Still, we didn’t hear many glowing comments about his abilities from the members of his pitching staff — which is mildly concerning. He may have the reputation as a guy “good at handling pitchers” but other than a few notes about him doing a nice job with Mike Pelfrey, there hasn’t been any concrete proof of that.

Part of the problem could be that his pitchers don’t know him very well. Between Brian’s myriad injuries since joining the Mets, and the revolving door of arms used over the past two years, it’s conceivable that few were able to really get to know Brian — and vice-versa.

Otherwise, Schneider has an above-average arm and a quick release that will usually put him into an acceptable range of 30-35% of runners thrown out (there was a time he was above-average, nailing 40-50%). He is still pretty good at blocking balls in the dirt (though again, not as good as he was), and is a trustworthy if uninspiring leader on the field.

Schneider’s two biggest problems are a lack of durability and a dropoff in offensive production. If he could catch like he did 4-5 years ago, you could accept a .240-.250 batting average with occasional streaks of pop. But he’s slowing down in all areas of his game, and is looking at a future in MLB as a backup.

It’s too bad, because he seems like a really, really good guy who hustles all the time and is fundamentally sound. For instance, he is remarkable at advancing runners and adept at the hit-and-run. When he’s going well, he shows a keen eye and good patience at the plate. His swing is textbook, but his hands have slowed a bit in recent years. He is a player whose value would increase by a move to a hitter’s park and into a semi-regular platoon with a similarly aging catcher (I thought last year that a Pudge Rodriguez / Brian Schneider tandem would’ve worked very nicely in ’09). Unfortunately, Citi Field does not benefit Schneider’s offensive skills and it’s doubtful the Mets will bring him back AND acquire a veteran catcher (Bengie Molina?). But it wouldn’t surprise me to see Schneider do well in limited duty next year for, say, the Colorado Rockies or Chicago Cubs.