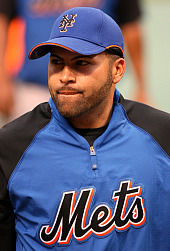 It’s safe to say that Omir Santos exceeded expectations in 2009.

Santos was signed as a minor league free agent in mid-January, an under-the-radar move lost among announcements such as Casey Fossum, Bobby Kielty, and Valerio de Los Santos — not unlike a similar transaction that brought Ramon Castro to New York in the winter of 2004. At the time, even those who noticed the signing figured Santos was simply an extra guy to catch all those pitchers invited to spring training. Santos was competing with Rene Rivera, Robinson Cancel, Salomon Manriquez, Josh Thole, and others for a third-string backup job that didn’t exist.

But Brian Schneider struggled with back ailments all spring, something about Santos caught the eye of Jerry Manuel, and the rest is history.

Santos began the season as Ramon Castro’s backup, but eventually became the unofficial starter — making Castro expendable once Schneider returned from the DL. Manuel’s preference for Santos was made loud and clear in a mysterious pinch-hitting move on April 30th, and was the beginning of the end for Castro.

All things considered, sending Castro to Chicago and keeping Santos made sense, since they are essentially the same player — except Omir is more durable, less expensive, and not as good a joke-teller.

Considering that Omir Santos performed admirably as the Mets’ starting catcher for a decent portion of the season, he was a fantastic find off the scrap heap. But we now must evaluate him as a starting MLB catcher, because that’s what the Mets need in 2010.

As a receiver, Santos is below average to average in all areas. The way he sets up behind the plate — moving into position late and not always setting his glove as a target — is OK for most pitchers, slightly disrupting to others. He is at best adequate at blocking balls in the dirt, and equally adequate to average when it comes to throwing — meaning, if the pitchers do their job of preventing big jumps, he should nail about 20-30% of baserunners. Some may even consider that “above average”, which is sad (when Johnny Bench’s percentage dropped down into the low 30s, he was considered washed up!). In any case, he does have the arm strength and enough quickness to throw out a decent percentage of the runners he should be throwing out.

We don’t know too much about his pitch calling, but some insiders have termed it “so-so”. He’s only been in the NL for a year so he doesn’t have a vast knowledge of opposing hitters. Let’s call it “neutral” — neither an asset nor a detriment. Same goes for handling pitchers; I can’t say that he made anyone on the pitching staff better — the best I can say is he probably didn’t hold back the majority of the staff. My analysis of him as an “on-field general” — meaning, taking charge of the defense — is similar. He didn’t get in anyone’s way, but it’s hard to say he was someone who the other 8 defenders looked to for direction.

Offensively, Omir was strong in executing the hit-and-run and hitting the ball the other way to advance runners. I don’t recall him bunting, though the final stats say he sacrificed twice. His batting average was an ordinary .260, his OPB a poor .296, and his slugging a below-averge .381. He did seem to have a knack for the clutch hit and a penchant for driving in runners, as evidenced by his 40 RBI in just over 300 ABs (he drove in 16% of the men on base when he came to the plate, which seems about average for a typical catcher). In short, he’s not terribly productive with the bat — though it might be enough if he was more impressive defensively (like, on a Yadier Molina level).

Omir’s 9th-inning homer against Jonathan Papelbon at Fenway Park will forever be etched in minds of Mets fans, and may cloud the judgment of those too emotionally attached. If you judge him independently of that blast, you may start to question whether he’s strong enough all-around to catch regularly for a championship club. As a backup, he’s able and adequate. For full time work, though, the Mets probably want someone who is either stronger all-around or is comparable save for at least one significant strength.

Back Will Holliday or Bay Affect Francoeur?
Next 2009 Analysis: Brian Schneider