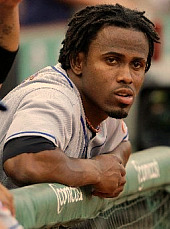 Obviously, Jose gets an “incomplete” for the 2009 season.

Reyes played in 36 games and was “day to day” for nearly a month before finally being placed on the 15-day disabled list — and was never seen again.

So much for that thought. As it turned out, Jose Reyes was grounded for the season — as were the Mets.

Perhaps a better idea is to analyze the players who filled in for Reyes. Alex Cora played over his head initially — he played so well, in fact, that no one would have noticed Jose’s absence had he actually returned as quickly as initially indicated. Unfortunately, Cora eventually crashed to Earth, suffered two thumb injuries, and was barely adequate until he himself hit the DL. Ramon Martinez appeared like an apparition, and disappeared just as quickly and mysteriously. Wilson Valdez flashed a fancy glove and a rifle arm, but was underwhelming offensively. Anderson Hernandez was surprisingly improved at the plate and strong defensively about 75% of the time, but a space cadet for the other 25%. Angel Berroa appeared at the position 8 times — which was 8 times too many (“appeared” is the most complimentary thing we can say about his brief tenure). In short (pardon the pun), the Mets were left with a gaping hole between second and third once Reyes went down.

What 2010 brings for Jose Reyes is anyone’s guess. When fully healthy, he may be the most electrifying player in MLB, and potentially among the top 3 or 5 most productive all-around players in the game. The Mets have repeated on several occasions that Reyes will be “ready by spring training” after undergoing surgery on his hamstring. However we have learned not to trust those reports (see: Duaner Sanchez, John Maine, Luis Castillo, Carlos Beltran, Orlando Hernandez, etc.). Unless, of course, by “ready”, the Mets mean “capable of transporting himself to Port St. Lucie without aid of a wheelchair”. Hopefully, Reyes will return fully healed, fully rehabbed, and at full strength. But even then, will he return to the all-out, fearless terror on the basepaths that he was prior to the injury? Or will he be tentative, with the injury risk always looming in the back of his mind? Worse yet, will he again run around with reckless abandon, and re-injure that balky leg?

Contrary to popular opinion, Jose Reyes at 75-80% is NOT still better than most NL shortstops. The position is brimming with All-Stars around the league, including three from NL East Rivals. Reyes rises above only when he has his legs — 100% of his legs. Without them, he’s still very good, and keeps the Mets at a championship level for the position, but is not necessarily a difference-maker. And for the Mets to reach the postseason in 2010, they need him to be a difference-maker.

Perhaps also, the Mets need to consider acquiring a backup plan — just in case Reyes’ return doesn’t go as smoothly as everyone hopes.

Back 2009 Analysis: Argenis Reyes
Next Mets Sign Chip Hale for Third Base