Reyes and Church Out, F-Mart and Some Other Guy In 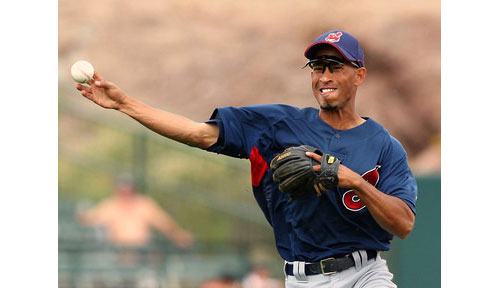 The Mets acquired shortstop Wilson Valdez to bolster the bench and add punch to the lineup.

Whoever it was in the Mets front office who was sober enough to realize the insanity of holding five players hostage from the disabled list, we thank you for releasing Jose Reyes and Ryan Church to convalescence. And we thank you for affording Jerry Manuel at least 23, maybe 24, players to work with today.

To take their places on the 25-man roster, the Mets acquired one player and promoted another.

First, the BIG news: the Mets acquired Wilson Valdez from the Indians in exchange for cash considerations. The 31-year-old shortstop was hitting only .198 for AAA Columbus. However, I’m sure that he’s simply in a slump, as his career MLB average is a whopping .216. Wielding that kind of bat, you’re surely asking, “how can we get him in the lineup when Reyes returns?” No worries — Valdez also is a super utlityman, with experience at 2B, 3B, and all three OF positions. We are told he is a slick fielder.

Yes, Alex Cintron remains a free agent, and Chris Woodward is hitting .297 with a .391 OBP through 100 ABs for the Tacoma Rainiers. But the price for those players must have been much higher.

In other news, the Mets have promoted Fernando Martinez from Buffalo. He will be the regular right fielder while Church is on the DL. Somewhere in the western part of the United States, MetsToday loyalist “Micalpalyn” is dancing a jig — and he’s not even Irish.

This is a GREAT time for F-Mart to make his debut, because the team has been winning without Church, Delgado, Reyes, and other regulars. Thus there is no pressure for Martinez to be a savior — he can simply go out there and play his game. I do have one request for Jerry Manuel: please do NOT bat him eighth. He’s already an extremely aggressive and immature hitter, and putting him one batter ahead of the pitcher will exacerbate those negatives. Remember when Lastings Milledge was put in the eight hole?

For the record, I’m very much looking forward to seeing F-Mart in the flesh, in an MLB game.

Finally, the Mets have yet another injury to deal with, as Carlos Beltran is suffering from an inflamed tibia. He has no idea how it happened. Strangely, Kevin Burkhardt reported on SNY that Jose Reyes injured his calf off the field. Is it possible that Reyes and Beltran were injured while dancing to merengue on the team bus?

Back Why Jose Reyes Is Not On the DL
Next Mets Game 45: Win Over Nationals