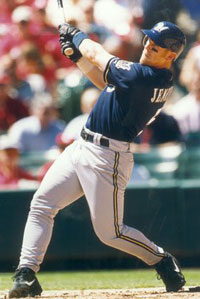 It will be a big test this weekend for both teams, as the surprising Milwaukee Brewers head into Shea for a three-game series with the Mets.

At 24-10, the Brew Crew currently has the best record in Major League Baseball, and don’t show any signs of slowing down. Similar to the Mets’ steamrolling of 2006, the Brewers have won all seven of their series so far this year, and look to continue that streak in Flushing. Of course, the Mets are no slouch themselves, with a 21-12 record of their own, and hope to improve upon their .500 slate (7 wins, 7 losses) at home.

As this is a such a significant series, and most Mets fans don’t know much about the Brewers beyond Ben Sheets, Jeff Sackmann of BrewCrewBall was kind enough to give us some insight on MLB’s hottest team.

At the time, did you think giving up Doug Davis — a solid if unspectacular innings eater — in the Johnny Estrada / Claudio Vargas deal was a smart one? And how do you feel it is panning out so far?

I liked it. (And I have proof) Estrada has always gotten a rap as an “offensive” catcher, but I think he’s had more value on the other side of the ball so far. And Vargas has far exceeded my expectations; an ERA under 3.00? I figured he was a stopgap until Yovani Gallardo showed up, but at this point he’s going to make the Brewers think long and hard before booting him from the rotation.

How much of an impact is Estrada having on the 2007 Brewers — outside of his bat (i.e., defense, working with pitchers, in the clubhouse, etc.) ? Was his acquisition and the intangibles he brought to Milwaukee in any way comparable to what Paul LoDuca brought to the Mets in 2006?

I guess that depends on what you think about Lo Duca. (I’m not a fan.) But for someone who got his reputation largely due to hitting .300 a couple of times, Estrada appears to be doing all the right things behind the plate. The nice thing about this team is that no one guy is making a huge difference: everybody is chipping in.

Right now, Geoff Jenkins is swinging as well as he was in 2003-2005. Back then he was a cornerstone of the organization. Now he’s a salty veteran in a sea of young up-and-comers. Do his teammates look to him for leadership, despite his reduced role in 2006?

Beats me. It doesn’t seem like a team with a clear-cut ‘leader’ in the clubhouse, though Prince Fielder may be emerging as that guy. I just appreciate the fact that Jenkins has accepted his reduced role and seems to be enjoying performing well on a first-place ballclub.

Can the Brewers win the NL Central with Craig Counsell at 3B if Corey Koskie can’t come back? What’s Koskie’s status? How is Ryan Braun’s glove coming along?

Based on early returns, it doesn’t matter if the Brewers put Bob Uecker at third base, they’ll still win. That said, Braun will be up before the All-Star Break, and the team will be better for it. Koskie has said he’s getting better, but as far as I know, he hasn’t done any baseball-related activities, so I’m not holding my breath. Braun has only made two errors so far at Triple-A, but that’s only half the battle; when he does get playing time in the bigs, the Brewers will have to sacrifice some defense for his bat. On the bright side, Rickie Weeks’s glovework so far this year has suggested that a young player CAN become a much better defender in a year or two’s time.

Right now, the Brewers are hitting on all cylinders — the offense is strong, starting rotation looks great, the bullpen one of the best in the NL. Is there a vulnerability ? What’s a Brewer’s fan greatest fear?

Third base is the hole in the lineup, but that doesn’t matter much as long as it’s only one hole in eight. The middle of the bullpen–and, more specifically, Ned Yost’s management of it–may be the achilles heel. He’s brought in bad relievers to handle tie games, and gotten predictable results. If the Brewers do make a deal and it isn’t to plug up the gap created by some unforeseen injury, it will probably be for another relief pitcher to put in front of Matt Wise and Derrick Turnbow.

Interesting insights from Jeff, who in addition to the well-written report on the Brewers, BrewCrewBall, also pens the PackerBackerBlog, still finds time to crunch numbers for the outstanding resources MinorLeagueSplits, and BeyondTheBoxscore, AND contributes to The Hardball Times every Wednesday and Friday.

With the day off today, we’ll have more on the series shortly. Check back soon, or subscribe to either the RSS feed or the email alerts.

Back Keppinger Resurfaces
Next Lawrence: Training Site Still Being Worked Out