Is Adrian Gonzalez Worth It? 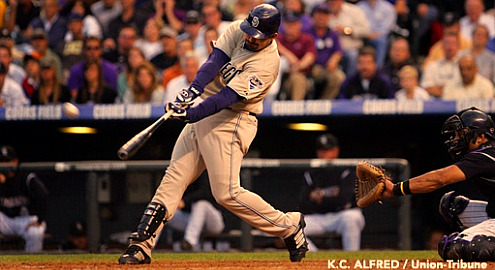 This winter will be abuzz with rumors surrounding San Diego Padres first baseman Adrian Gonzalez. Some think his breakout 2009 season is a fluke, while others believe he’s on the brink of superstardom. In a well-researched article, contributing stathead Matt Himelfarb answers the question: Is Adrian Gonzalez worth it?

Virtually all reports leading up to this past year’s trading deadline indicate the Padres will seriously consider trading Adrian Gonzalez this winter. If so, San Diego will almost certainly demand a young, talent-laden package; Gonzalez is young, inexpensive, and most importantly, coming off a monster 2009.
After taking over as the Padres everyday first baseman in 2006, Gonzalez, entering this year, was a very good, albeit unspectacular player. He posted an OPS. of .861, .848, and .871, respectively, while providing overall average defense. He was worth about 3-4 wins per year, or around $14 million dollars.

Then Gonzalez decided it was time to join baseball’s elite in 2009, posting a .277/.407/.551 line. Combined with improved defense (3.4 UZR/150), Gonzalez is now mentioned in the same breath as Joe Mauer, Prince Fielder, Miguel Cabrera, etc. — and rightfully so; he was worth 6.4 wins in 2009, or about $29 million dollars.
Thus, a consensus has seemingly developed that Gonzalez, coming off a career year, is generally overrated, and the Padres will demand (and receive) far more talent than he is really worth. Despite the sheer inconsistency of Gonzalez’s performance, nothing about his 2009 performance really strikes me as flukish; his walk rate (17.5%), exploded this year, but he had been steadily improving his ability to draw walks since arriving in the big leagues in 2004, and hitters have a tendency to increase their BB rate as they get older. He hit more fly balls than usual, and more of them left the park; for hitters, this is within their control.
If anything, he might have been unlucky, given his .280 BABIP. According to Derek Carty’s excellent xBABIP tool, Gonzalez’s xBABIP in 2009 was .314. His adjusted line looks something like .302/.426/.611, which would have given him the second best OPS in baseball, behind Albert Pujols, while his new wOBA (.438), would have tied for second with Joe Mauer. When you adjust for Petco Park, Gonzalez was worth around 8.35 wins, or almost $37.5 million- on par with both Mauer and Pujols. That is potentially a $10 million dollar difference between his perceived value and his actual net worth.

In other words, a case can be made that Gonzalez was the best player in the game in 2009.

Than I took a look at his Home/Away split over the last three years, and I started feeling even more bullish about his trade value:

Four seasons is a pretty large sample size, and you have to consider the fact players generally perform better at home than on the road. Yes, I know WAR accounts for run environments, and the people who invented wRAA (weighted runs above average, the offensive component of WAR), are a lot smarter than me. But given the instability of park factors from year-to-year, perhaps Gonzalez was more than a very good player all those years?

Just for kicks, I decided to see what his WAR would look like from 2006-2009, only using his away numbers for offense and adjusting it for a full season. As I did with his xBABIP, I used the standard formula for wRAA: ((wOBA-lgwOBA)/Scale)*wOBA- the league average is usually around .330, and the scale is around 1.15. The purpose of the actual scale is to normalize run environment, but in this case it is just to convert wOBA into wRAA.

It is worth noting that, in 2007, Gonzalez was almost a full run better, and was worth almost $4 million more. Perhaps Petco Park played as more of a hitter’s environment that year, or WAR failed to adjust properly. Aside from that year, however, the difference in wRAA was negligble- in fact, Gonzalez’s away wRAA was actually worse than his park adjusted wRAA according to by .21 (my WAR is only a fraction better due to a few decimal differences in the calculation).

Despite my suspicions, it appears WAR does, in fact, do a very good job of adjusting for park differences. It reflects that from 2006-2008, Gonzalez was, indeed, an offensive force, but still around 3-4 wins. Usually, Gonzalez’s wRAA is increased by about 5-6 runs per season for playing in Petco. From 2006-2009, he was 3.18 runs per season better on the road. As I mentioned, though, players generally play better at home than on the road.

Nevertheless, assuming Gonzalez, offensively, posts numbers somewhere in-between his 2006-2008 totals, and his adjusted 2009 campaign (about a .401 wOBA)- my guess is he will accumulate about 700 plate appearances- and provides average defense (his career UZR/150 is 0.1), he will be worth about 6 wins in 2010, or around $27 million dollars.

Again, those numbers are right in between his 2009 season and the previous three years, which is what I think most people expect out of Gonzalez and is a reasonable rate of regression. I personally think he can be worth more than that estimate, since last year’s performance is hardly unrepeatable.

In other words, he is easily one of the top ten-fifteen offensive players in the game, and potentially top five. Overall, he is certainly comparable to Miguel Cabrera, Kevin Youkilis, or Mark Teixeira- I will put his floor between 5 and 6 wins- and has an MVP ceiling that is not far out of reach. Not to mention you can have him during his peak years- Gonzalez should maintain this level of production for at least the next five seasons- at the price of a platoon player for the next two ($4.75 million and $5.5 million respectively).

It is hard to overrate the guy.
Unlike Roy Halladay, the competition for Gonzalez will be much stiffer due to his auspicious contract. Now you know why San Diego would have received Brandon Morrow, Phillipe Aumont, Carlos Triunfel, and several top Boston prospects for Gonzalez at last year’s deadline. Mets fans are probably looking at Fernando Martinez, Ike Davis, and Wilmer Flores, plus more. It is well worth it.

You can read more from Matt Himelfarb at his blog. Most recently he has posted some thought-provoking analyses regarding minor league free agents

Back 2009 Analysis: Fernando Tatis
Next To All You Yankee Rooters