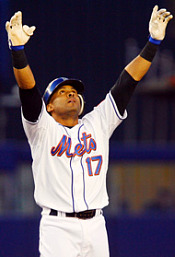 It was a wonderful story in 2008 when Fernando Tatis came back from the baseball dead, found his way back to the big leagues, was a key cog for the Mets in the second half of the season, and earned money to build a church in his hometown of San Pedro de Macoris.

The Mets front office was obviously drunk with the feel-good story when they re-signed Tatis to a one-year, $1.7M contract for 2009 — a mere drop in the bucket for the NL’s highest payroll, but nonetheless an extreme price to pay for a 30-something utilityman with average all-around skills. As with most of their signings, the Mets were bidding against themselves, as Tatis was re-upped before he had a chance to file for free agency.

From a public relations standpoint, the Mets HAD TO bring Tatis back. The story was too warming, his clutch hitting too fresh in the minds of the fans, and few were willing to accept the teetering house of cards that the economy was at the time. I’m not too proud to admit that I was one of those who fully supported the signing, terming the salary “paltry”.

But hindsight is 20-20, and when we play Monday morning quarterback, we can see how this deal wasn’t necessarily awful, but certainly overpriced.

Some of the things that were overlooked last October 30th, when we were celebrating the re-signing of the NL Comeback Player of the Year, included the fact that Fernando Tatis was a fairly ordinary hitter — and almost exactly true to his career numbers — if you omitted his high-flying July 2008. He hit like Superman that month, posting a .397 batting average, .463 OBP, .767 SLG, and 1.231 OPS. Now I understand you don’t punish a player for having a great month, but at the same time you have to take into consideration that those numbers artificially bloated his season-ending totals significantly, and you can’t realistically expect Fernando Tatis to repeat such a 30-day stretch. Those numbers are close to the best that Albert Pujols can accomplish in a month-long hot streak.

So it shouldn’t have been a surprise when Tatis reverted to a .282 AVG, .339 OBP, .438 SLG, .777 OPS and 8 HR in 345 at-bats in 2009 — those numbers are pretty much in line with what he’s done his entire 10-year MLB career. He played multiple positions with varying degrees of mediocrity: in the outfield and at first base he’s below average; at third base he’s average; at shortstop and second base he can fill in in a pinch and not embarrass himself. He is a great teammate, hustles his butt off, and fundamentally sound on offense. As a pinch-hitter, he’s pretty good — 2 HR and .257 AVG in 40 ABs. But he is not worth $1.7M.

Again, you can say, “well what’s $1.7M to a team with a $150M payroll?”. But this is an issue that permeates throughout the roster, with players at all levels of performance. The Mets overpay — significantly — for bench players and AAA depth such as Tatis, Alex Cora, Tim Redding, and others. After a while, all the seemingly insignificant $1M and $2M contracts add up, and it keeps a team from having the flexibility to jump on a bargain like Bobby Abreu or Juan Uribe. Combine the “little” contracts with the overpayment in “big” contracts (Oliver Perez, K-Rod, Brian Schneider, Carlos Delgado, etc.) and it becomes clear how the highest payroll in the NL can finish in second to last place.

But it’s not Fernando Tatis’ fault that the Mets overpaid him. The question is, will he play in 2010 for the Mets? He is eligible for free agency, and can roam the open market for the best deal. I’d like to see him offered a market rate contract — in the $600K range — and be given the opportunity to earn a job during spring training as a utilityman / pinch-hitter. But no guarantees.

Back Where They Are Now: Yusmeiro Petit
Next Is Adrian Gonzalez Worth It?