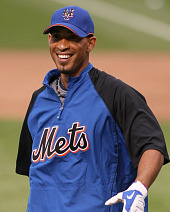 When the backup (Ramon Martinez) to the backup (Alex Cora) went down, the Mets found themselves hunting the scrap yards for a fill-in at shortstop who had Major League skills. They found Wilson Valdez and, all things considered, could’ve done a lot worse. In fact, they DID do a lot worse — Angel Berroa was on the roster for about a week.

The 31-year-old Valdez displayed excellent defensive skills — including a rifle for an arm — but not much with the bat. He was fundamentally sound in the field and on the basepaths, and gave good effort. Though he played almost exclusively at shortstop for the Mets, he’s equally adept on either side of the second base bag, and can handle both third base and the outfield in a pinch. Whether he’ll ever hit enough to justify a full year on the 25-man roster is questionable, however.

Early in his pro career, Valdez was considered a bright prospect with enough bat and great speed, zipping through the low minors into AA with relative ease — until it was discovered his true age was two years older than what his birth certificate suggested. Once he reached the AAA level, he established himself as a typical “4-A” player — good enough to start in AAA, not quite good enough for MLB. He spent 2008 in Japan before being signed by the Indians last winter, and was teetering at the Mendoza Line when the Mets purchased his contract.

At Buffalo, Valdez hit .298 in 36 games before arriving in Queens. He played in 41 games for the Mets and hit .256 with a .326 OBP, looking overmatched most of the time. However, he did on occasion drive the ball into the gaps, managing two triples and three doubles.

The Mets have already dropped Valdez from the 40-man roster, and it’s unclear whether he will return to the organization. Considering how thin the Mets are at shortstop at the upper levels of the system (though, you could say that for ALL positions), I would be fine with seeing Valdez re-signed to a minor league deal and assigned to AAA Buffalo. He and Anderson Hernandez would make a nice DP combo up there and who knows, one or both could continue to advance with their offensive skills. And as mentioned at the top of this post, the Mets could do worse.