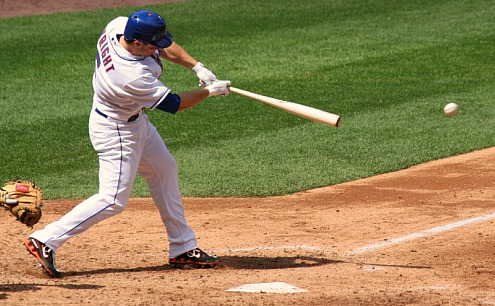 It’s not easy being David Wright.

But it’s true — for David Wright, 2009 was a bad year. Why? Because he put only ten balls over the fence, and we expect him to deposit three times as many beyond the dimensions of the playing field.

Hard to say. Part of the reason for the drop in OBI was his concurrent drop in homeruns — it’s hard to drive in runners from first with a single (19 of his 39 doubles and 2 of his 3 triples came with the bases empty). Had he hit his usual 30+ homers, that’s an extra 20 RBI right there, putting his RBI total at 92, and there’s a good chance at least half of those would’ve been with at least one runner on — meaning, he likely would have reached that milestone 100 RBI figure.

But that’s the crux of the matter, isn’t it? Why did David Wright fail to hit the ball over the fence more than a dozen times?

The answer isn’t as simple as a glitch in his swing, though that’s part of it. More likely, it’s a combination of a mechanics, approach, internal pressure, protection in the lineup, plate discipline, and luck.

Mechanics
Like most pro hitters, Wright occasionally needs to fix minor issues in his swing mechanics over the course of a 162-game season. Bad habits occur for a number of reasons, though often they come about as the result of fatigue. Many pointed to his Home Run Derby contest win as the beginning of his problems with an uppercut — and it makes sense. Similarly, Wright was put through Jerry Manuel’s mysterious 80-swing drill in spring training. Based on my 15+ years of teaching hitting, and conversations I’ve had with other hitting coaches, pro players, and trainers, taking 80 swings in a row is likely to do more harm than good, because it can exhaust a player and in turn cause his body to make adjustments to compensate and keep the bat moving. This isn’t rocket science, and not applicable only to baseball, but to all physical actions. Think about it: if you ever tried to bench press 80 times, chances are your form would suffer before you were halfway through — you’d be arching your back, pushing one arm more than the other, etc. The same type of things can happen swinging a bat too many times in a row.

But why did the 80-swing drill affect David and not, say, Carlos Beltran? Who knows — maybe Wright got in the cage right after taking 500 ground balls, or running 5 miles. Or maybe the 80-swing drill had nothing to do with Wright’s mechanical issues — it’s only one theory. But certainly, something was off with his swing, particularly early in the season, when he struck out 53 times in the first two months.

Approach
The thought behind the 80-swing drill was to get hitters to cut down their swing and hit to the opposite field. It was a nice idea by Jerry Manuel, since the team would be playing in a new, large, home park. But maybe David Wright took that idea to the extreme, and worked too hard at cutting down his swing, and looking more for outside pitches than ones he could pull. It’s OK if Anderson Hernandez or Doug Flynn concentrates on poking balls the other way most of the time, but a perennial 30-homer guy like Wright should be looking to jerk the ball into the seats every now and then.

Internal Pressure
As the season wore on, and Wright’s power shortage became more of a public concern, you have to believe that Wright himself also began to wonder why balls weren’t going over the fence. In addition, Wright may have put more pressure on himself to carry the team after Carlos Delgado and Carlos Beltran went on the DL. Perhaps he put some extra pressure on himself to hit homeruns — which usually results in popups, weak grounders, and swings and misses. There is a fine line between taking advantage of pitcher’s mistake and forcing the issue by guessing too often that he’s going to make a mistake.

Lineup Protection
For a good chunk of the season, there was no other power threat in the lineup other than David Wright. Normally, I don’t put too much stock into the concept of protection, but in the case of the 2009 Mets, the lineup often resembled one you might see from an NL club in the 1970s. Back then, crafty pitchers could pitch around the one or two sluggers in the lineup and go after the punch-and-judy middle infielders batting toward the bottom. Similarly, opposing pitchers in 2009 could nibble the corners when Wright came to the plate, knowing that if he walked, no big deal, since there wasn’t anyone after him who had the kind of power reputation to strike fear. As a result of not seeing many pitches near the middle of the plate, and combined with the internal pressure, Wright expanded his strike zone, swinging at pitches he wouldn’t have in 2008 (it’s not unlike Carlos Beltran’s power outage the year before Delgado arrived).

Luck and Discipline
It’s not really luck as much as a function of lineup protection. Generally speaking, batters hit homeruns not because they try to, but because the pitcher lets them — it’s a combination of luck (the pitcher making a mistake) and discipline (waiting for that pitch to drive). This is especially the case with sluggers who have more compact, line-drive swings that allow them to also have high batting averages, such as Wright. (As opposed to the severe uppercut, huge-rip swings of Ryan Howard, Matt Stairs, and the like.) Many of Wright’s homeruns come “by accident” — meaning, he was simply trying to drive the ball, but hit it just right to impart the lift needed to carry over a fence. Usually, these “accidents” happen when the pitcher puts a ball “in the batter’s kitchen”, or that part of the zone where a hitter is very strong. Once in a while, a hitter may put himself into a situation where he can “guess” a pitch will be in a particular location, and plans to take a homerun swing if he gets it. Additionally, some hitters can quickly recognize a hanging curveball, and take an appropriate swing to mash it over the fence. Still other times, it’s simply a matter of a hitter being slightly fooled on a breaking pitch or change-up, causing him to commit his hands and weight too early, but he gets lucky and has all that momentum striking the ball perfectly, far in front of the plate, and can pull the ball past the left field foul pole.

I’m going to go on a limb and say that Wright wasn’t able to hit many homeruns on “accident” because pitchers were working around him. Further, because he was expanding his strike zone, he was unable to get himself into enough “hitter’s counts” and further, when he did get himself into them, the pitcher wasn’t giving him pitches to drive — but rather continuing to nibble, hoping he’d chase something.

There is nothing “wrong” with David Wright. He had a bad year in terms of power because of a combination of reasons that can be easily fixed in 2010 by having Beltran and another slugger present in the lineup. With other hitters around him, Wright can relax and tighten his strike zone again. The home runs will follow.

His defense, though, is concerning — it definitely looked as though he took a step back. Half of his 18 errors came on throws — maybe a better scooper at first base and consistency around the 2B bag would prevent a handful of those? He botched 9 ground balls, which isn’t awful. But, it seemed like he lost a bit of range. You have to wonder if his fielding issues had anything to do with the record number of walks issued by the Mets’ pitching staff — ball after ball after ball causes fielders to lose focus and “be back on their heels”.

Bottom line is, I’m not worried about David Wright — and confident that with a better ensemble around him, he’ll go right back to being the 30-HR, 100+ RBI guy we saw prior to 2009.

Back Podcast with a Pro On Pitching
Next A Short Hot Stove Season?