Wally May Be Back, Man 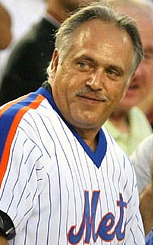 Most New York newspaper sources are reporting that Wally Backman will be returning to the Mets organization as a minor league manager, with the official announcement coming on Tuesday.

I had the pleasure of spending a few hours with Wally yesterday afternoon, just talking baseball. He would neither confirm nor deny the news, and since this blog isn’t run by “Scoop” Brady, and doesn’t seek to get a cheap influx of hits by irresponsibly breaking news when I’m asked to sit on information, I’m happy to respectfully wait for Tuesday and therefore wasn’t pressing Wally for confirmation.

Instead, we talked baseball — nothing specific, just idle chatter on his experiences as a manager, his thoughts on the game, and some insight on some of the players he’s managed or seen over the past few years.

One thing we did discuss was his philosophy in terms of young ballplayers on their way to the big leagues. Wally Backman believes that players can and should learn how to win, no matter the level of play. In his view, learning to win and “development” go hand-in-hand. He eschewed organizations that put a premium on “developing” players, to the point where “development” took precedence over winning ballgames.

Some may not take this the right way — much like few people truly understood where Vince Lombardi was coming from when he said “winning isn’t everything, it’s the only thing”. So I said to Wally, “in other words, you teach players to do the right things, all the time — to constantly practice ‘winning habits’ — and if they do, they’ll have a good chance to win more games than they lose, right?”

His answer: “Exactly. You can’t win until you learn how to win.”

If indeed Wally Backman is on the verge of re-joining the Mets, and is bringing ideas such as this with him, I have to change my current pessimism into optimism. Hopefully, the Mets are looking to inject more people like him throughout the organization (re-hiring like-minded Tim Teufel is further evidence that the Mets are committed to change — hopefully John Stearns is also on the radar). It may take some time before we as fans reap the benefits of philosophies instilled at the lower levels of the farm system, but at least we’ll know a philosophy that makes sense, and is grounded in success, is in place.