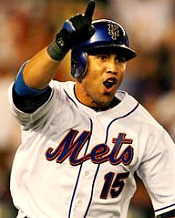 How do you evaluate a half-season of performance that was riddled with nagging injuries?

Carlos Beltran played in 81 ballgames — exactly one-half of a 162-game season. A good number of those games where played on an injured knee, so there’s some reason to believe that his numbers could have been even better.

Instead, the day Beltran was placed on the disabled list symbolized “the straw that broke the camel’s back” in terms of the Mets’ chances for a postseason run. The roster had been ravaged by injuries since late April, but fans and the Mets manager held out hope through much of the first half of the year. Once Beltran went down for an indeterminate amount of time — joining Carlos Delgado, Jose Reyes, Oliver Perez, John Maine, JJ Putz, and the “backups to the backups” — it was too much for General Custer Jerry Manuel to take. Only David Wright and Johan Santana remained from the depleted Cavalry, and the white flag went up.

Carlos Beltran had a great half season in 2009. Unfortunately, we have no idea what he’ll do in 2010.

First, there is the issue with his knee, which at one point was thought to require surgery. At least one expert suggested he might need something called “microfracture” surgery, which would shelve Beltran for at least a full year. Obviously, the Mets couldn’t afford to lose an $18.5M player, and Beltran is not the type of guy who wants to sit on the sidelines for year, so it was lucky that such a procedure was found to be unnecessary. But according to reports, Beltran came off the DL despite still feeling soreness in his knee, and no one but he knows for certain if it still is an issue.

What we do know is that Beltran hit .284 after he came off the DL in September. But he was handled gingerly and only started in 18 of the last 24 games of the season. Will an offseason of rest be enough to allow Beltran to return to being an everyday player? Will his knee be able to handle the rigors of a 162-game season?

If healthy, Carlos Beltran is among the top 3 centerfielders in MLB and a mainstay in the lineup. But it would be irresponsible to believe that he, at 33 years old and coming off a major knee injury, can play 150+ games in 2010. MLB now tests for PEDs, so seeing players continue to perform like 25-year-olds when they’re approaching their mid-30s is less common. Beltran is banged up, and the Mets should make appropriations for that fact by having a solid centerfielder at the ready — whether it’s Angel Pagan, Jeremy Reed, Cory Sullivan, or someone we haven’t seen in Flushing. We’ll keep our fingers crossed and hope for the best.

Back Wally May Be Back, Man
Next Ruben Gotay Back On the Radar