Mike Pelfrey: Do or Die? 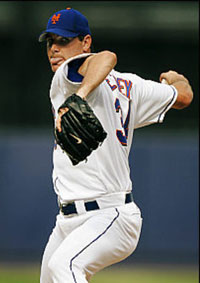 Early May is hardly the time to evaluate a Major League Baseball player. Only a month into the season, it can take some time for guys to get into the swing of things, find a rhythm, and make minor mechanical adjustments. Also, the weather is just starting to get comfortable, and many players simply don’t play well in the often chilly, unpredictable April weather.

So is it too early to say that today’s start against the Brewers is a “do or die” situation for young Mike Pelfrey?

In five starts so far this year, Pelfrey has zero wins and four losses. Those four losses represent one-third of the team’s total loss count. With the Braves back to their “win 3, lose 1” routine, and the Mets a half game behind in the standings, every win — and loss — counts.

Over those five starts, Pelfrey has a 6.39 ERA. In 25.1 innings, he has given up 28 hits and 14 walks. As a sinkerball pitcher, you don’t mind the hits so much, as he’s supposed to pitch to contact. The 14 walks, however, are alarming.

His best start came on May 1, when he pitched into the 7th inning (6 1/3 total) and gave up 5 hits, 3 walks, and 3 runs. Not an outstanding game, but encouraging. His other four starts range from awful to poor to so-so. He’s been shaky at the start of games, looking uncomfortable and confused in the early innings. He’s also been inefficient, getting to his 100-pitch count before he can get into any kind of rhythm. In addition, he does not help himself with the little things, as he is below-average to poor when it comes to holding runners, fielding his position, hitting, and bunting.

All these signs suggest that MIke Pelfrey simply isn’t ready to pitch at the Major League level. How long will the Mets continue to allow him to learn on the job, while they fight the Braves for first place?

Part of the reason Pelfrey has made it this far is by default: there simply aren’t any better options in the organization. If El Duque didn’t go down, Jorge Sosa might have forced Pelfrey’s demotion. Other than Sosa, the Mets have little else in AAA. Chan Ho Park failed miserably in his one start, and both Philip Humber and Jason Vargas are at a similar stage in development to Pelfrey. Humber was just named the PCL pitcher of the week, but his 4.86 ERA isn’t exactly earth-shattering. Vargas is at 5.30, mixing in good starts with bad.

Things aren’t getting any easier for Pelfrey; today he faces the red-hot Brewers, who will be trotting ace Ben Sheets to the mound. If he loses again, he’ll be 0-5, and the Mets will have to start to consider how losing is going to affect the kid’s confidence and long-term development — not to mention the team’s chances to overtake the Braves. How far do you let him go? 0-7? 0-10? At what point does he —and the team — think a loss is the most probable outcome when he takes the mound? The Tigers let Jeremy Bonderman lose 19 games his rookie year, and didn’t blossom until three years later. Was it the right move? Who knows?

Chances are, Pelfrey will get at least one more start beyond today’s — really, it all depends on how much longer El Duque is out. With Sosa turning in back-to-back masterpieces, it doesn’t take a brain surgeon to figure out who goes down when El Duque returns.

On Pelfrey’s side is this: if he pitches well, and earns a win, it will be a tremendous boost of confidence, the kind that he can ride through his next few starts. Beating the team with MLB’s best record, against their ace pitcher, can do wonders for an impressionable young kid trying to find his way. He’s shown subtle development so far, but nothing to get overly excited about. Rather than a “good effort” in a losing cause, Pelfrey is ripe for a big win over a formidable opponent — something that he can build on going forward. Beating the Brewers could give him enough confidence to ride to a win in his next start, and make the decision of who to demote more difficult when El Duque leaves the DL.

Back Mets Game 34: Win over Brewers
Next Mets Game 35: Loss to Brewers