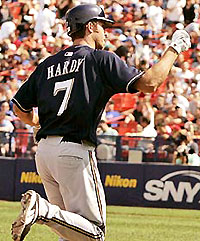 Apparently, the Devil hasn’t paid attention to Major League Baseball in the last ten years, otherwise he wouldn’t have placed Joe Hardy on the Brewers. Hardy is supposed to be ripping up the Yankees, and Beelzebub probably thought Milwaukee was still in the American League. An honest mistake, when you think about it. Who ever would believe that a team could switch leagues? The only way that would ever happen is if the owner of the team was also the Commissioner of Baseball, and …

So J.J. Hardy is apparently getting the same B-12 shots that Miguel Tejada gave Brian Roberts in 2005 — except he’s on a pace to hit about 50 homeruns instead of 18 (hmm … maybe it was a mixup with one of Brady Anderson’s 1996 vitamins). Hardy had only one hit, but it was a grand slam off Joe Smith in the 8th that essentially ended the game — his second tater in as many games. Hardy is now leading the NL in RBI and is tied for the homerun lead with Barry Bonds, Adam Dunn, and Prince Fielder. Huh. Maybe Houston shortstop Adam Everett should have a chat with Hardy, since they were more or less the same player a year ago.

Before Hardy put the game out of reach, the Mets looked to have an outside chance of stealing the game away from the Brewers, who should have put the game away much earlier. It was a 4-3 game before the Brew Crew came to bat in the 8th, but things changed quickly as Pedro Feliciano gave up a leadoff single, Craig Counsell intentionally allowed the ball to hit him on a bunt attempt, and Gabe Gross was legitimately hit by the first pitch thrown by reliever Joe Smith. Then Tony Gwynn, Jr. worked the count full before swatting a bases-loaded single, and Hardy hit the first pitch he saw over the fence. Within five minutes, the game went from very tight to out of hand.

Looking back, the only reason the Mets made it as close as it was up to that point was due to Ben Sheets pulling an Oliver Perez. Sheets was throwing very well through the first four innings — borderline dominating — but lost his sh*t in the fifth after Billy Hall dove for a Shawn Green fly that turned into a triple. Why Sheets panicked with a four-run lead and Mike Pelfrey facing him is anyone’s guess, but the misplay clearly affected Big Ben’s game. After Green’s blast, Paul LoDuca worked a ten-pitch walk to further infuriate Sheets, and he uncorked a wild pitch to Ruben Gotay to score Green. Gotay grounded out, advancing LoDuca, but pinch-hitter David Newhan mashed the first pitch he saw over the rightfield fence to make the game 4-3. Unfortunately, that inning was the exent of the excitement for the hometown fans. The Mets collected only six hits the entire game, looking defensive and overmatched in their swings against Sheets and the Brewer bullpen.

Meantime, Mike Pelfrey did not pass muster in his fifth start. He allowed 4 earned runs on 8 hits and 3 walks in 5 innings, and looked much worse than that. Once again, he was a nervous nelly in the first inning, allowing one run but barely escaping before more damage was done. He got through a scoreless second against the bottom of the order, but allowed another run in the third and two in the fourth. His command was erratic, and his fielding was inadequate; at least three base hits were right back up the middle, and he was too slow in covering first base on a ground ball to the right side in the fourth.

With each start, Pelfrey looks less and less like a Big Leaguer. In fact, he’s shown nothing to suggest that he’s ready to pitch at this level, and does none of the little things to help himself. As a sinkerballer, he should field his position well, but he doesn’t. He doesn’t mix up his moves and takes too long to deliver the ball, so players run wild on the bases. He can’t hit whatsoever, and isn’t able to bunt, either. For a guy who is supposed to be pitching to contact, he walks too many batters. He cannot throw his change-up for strikes, and as a result relies on a flat slider too often for strikes. Add all these issues to an obvious lack of confidence, and there’s only one decision best for everyone: go down to the minors and get some seasoning.

Some day, Pelfrey might evolve into a solid Major League pitcher — maybe an excellent one. But first he needs to develop his secondary stuff, and he must improve his overall game. It’s not fair to him nor the Mets to have him try to figure everything out on the big stage. Even if El Duque misses his next few starts — which looks likely — I’d be surprised to see Pelfrey take another turn.

Not a whole lot of positives in this game. The Mets, as a team, played sloppy baseball. For example, in the fourth inning, with one out and down by four, David Wright smacked a line drive to the right field wall and was thrown out at second trying to stretch it into a double. He was out by about five feet, and had no business trying for an extra base in that situation — not when you have sluggers like the two Carloses coming up next. In a tight game, maybe, but down by four — no.

It wasn’t any better in the field, epitomized by a crazy play in the fourth. Pelfrey loaded the bases with one out and appeared to have gotten a big out by inducing Prince Fielder to pop up to shallow right. Ruben Gotay backpedaled to catch the ball, and Craig Counsell — the poor man’s version of David Eckstein — incredulously tagged up from third and ran home. With his momentum going backward and on his heels, Gotay had no chance to make a strong throw and Counsell scored easily. However, Tony Gwynn had also tagged up from second and J.J. Hardy from first, and Paul LoDuca had Hardy caught between first and second. LoDuca fired the ball to Reyes at second, who was not paying attention to the fact that Gwynn never slowed down and was rounding third. Hardy stayed in the rundown long enough to allow Gwynn to score before being tagged for the final out of the inning. In 34 years of watching baseball — at all levels — that was the first time I ever saw two runners score on an infield fly that resulted in an inning-ending double play. You don’t see comedy like this in little league!

Jose Reyes was an ugly 0-for-4 with a strikeout. Against Sheets’ curveball, Reyes appeared to regress to 2005, flailing away at breaking pitches in the dirt. A good deuce can do that to a hitter.

Carlos Delgado also had a bad day, also 0-for-4 with 3 strikeouts. He wasn’t getting any help from home plate umpre Phil Cuzzi, either, who was calling high and outside strikes on Delgado all day.

Moises Alou was hitless as well, but more importantly, left the game with a strained left quadriceps muscle. Expect “Everyday Endy” to be in the lineup for the next few days.

The rubber match pits human slot machine Oliver Perez against ace lefty Chris Capuano for a 1:10 PM start. Oh, you thought Ben Sheets was the ace? Think again. Capuano is currently 5-0 with a 2.31 ERA and a stingy 1.13 WHIP. He threw eight shutout innings against the Nationals in his last start. Let’s hope Ollie can keep his underpants clean for this start and give the Mets one of those seven-inning masterpieces.

Back Mike Pelfrey: Do or Die?
Next Pelfrey Down, Gomez Up