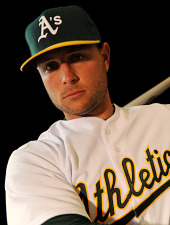 First of all, I’m not buying the idea that the Yankees “aren’t interested” — and same goes with the Angels, Red Sox, and every other team that can afford Matt Holliday’s Scott Boras’ contract demands.

I’m cynical because I look to past history as an indicator of the future. And around this time last year, the Yankees were NOT going to re-sign Andy Pettitte, and were “out of the running” on Mark Teixeira ten days before signing him. A year prior, those same Yankees insisted — repeatedly — that they would not re-sign Alex Rodriguez if he opted out of his contract. Suffice to say, I take any information regarding the Yankees’ interest with a grain of salt.

Additionally, I find it hard to believe the Angels won’t pursue Holliday. They needed a big bat last winter — offering Teixeira a huge deal — and could lose both Chone Figgins and Vladimir Guerrero this winter. Boras claims Holliday is on par with Teixeira, and if Arte Moreno agrees, he may offer something similar to the 8-year, $160M contract that Teixeira turned down. Holliday makes more sense for the Angels now, considering that first baseman Kendry Morales had a breakout year and they will have a LF / DH void if (when) Vlad leaves. Moreno has the cash to do it, though he will likely first try to retain John Lackey and possibly Figgins.

As far as the Red Sox go, it does seem that they like Bay and Bay likes Boston. But you have to figure that the Bosox will at least look into Holliday, if for no reason than to accelerate talks with Bay.

What it looks like to me, at this early point in the free agent season, is posturing on the part of the suitors. No one is willing to show their hand, especially with Scott Boras in charge of the proceedings.

If indeed history is any indicator, the Matt Holliday sweepstakes will go on for at least a month and a half — or longer — and a number of interested parties will be inquiring in due time.