Pelfrey Down, Gomez Up 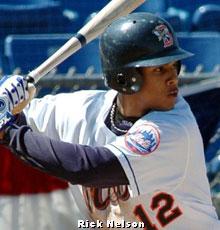 For the second consecutive May, the Mets are rushing a 21-year-old, toolsy outfielder up to the big club.

Today, Carlos Gomez suits up for the first time as Major Leaguer, though with much less fanfare and lower expectations.

Unlike Milledge’s situation last year, the Mets are not looking for Gomez to challenge for a starting position, nor make a significant impact on the team. The team is pretty much set with veterans Moises Alou and Shawn Green flanking Carlos Beltran, and Endy Chavez filling in as necessary. Whereas Milledge was promoted to push Xavier Nady and Cliff Floyd for playing time, and possibly finish 2006 as a starting corner outfielder, Gomez may be returning to New Orleans before the end of the week.

Carlos Gomez will provide an extra set of legs off the bench and some outfield depth while Moises Alou nurses a strained left quad (and sore shoulder, and swollen knee, and split lip, etc.). Alou did not go on the disabled list (yet), so Mike Pelfrey was sent down to make room on the roster for Gomez. If Alou’s myriad injuries do not put him on the DL, Gomez most likely will go back down to New Orleans to make room for a starting pitcher the next time Pelfrey’s turn comes up — which would be on Thursday afternoon.

In his first few weeks of AAA, Gomez tore up the PCL, but has since cooled down. He’s hitting .286 with 2 homers, 8 doubles, 2 triples, 13 RBI, and 17 stolen bases in 36 games. In addition, he’s impressed scouts with his defense in centerfield, though he’ll be playing the corners with the Mets. If those 17 SBs seem to indicate speed, consider this: Jose Reyes says Gomez is faster than him. Despite the decent numbers, he most likely would not be in Shea Stadium this afternoon if not for injuries suffered by Ben Johnson and Lastings Milledge. With his raw, unpolished talent requiring seasoning, the Mets would much rather have Gomez playing every day in the PCL than riding the bench with the big club.

That said, Gomez is starting in rightfield today, so the Mets might give him a long look in his short stint at Shea (does that make any sense?). It’s doubtful he’s any more ready for MLB than Milledge was last year (or Pelfrey this year, for that matter), but now is as good a time as any to see how close he is to making the leap. Should he show maturity beyond his years, it may make it easier for the organization to subtract Milledge in a deadline deal for a pitcher or other playoff part.

In any case, it should be fun to watch one of Citi Field’s future thoroughbreds in this limited preview. And who knows, with a little luck, Carlos Gomez just might find himself on the 25-man roster longer than anyone expects.

Back Mets Game 35: Loss to Brewers
Next Mets Game 36: Win over Brewers